Update Required To play the media you will need to either update your browser to a recent version or update your Flash plugin.
By Christopher Jones-Cruise
17 June, 2017


A woman known as Grandma Adela is one of three women featured in a new documentary called "The Apology." The film is about the Japanese military's sexual enslavement of women during World War II.

Filmmaker Tiffany Hsiung worked for five years to persuade the three victims to tell their stories. Hsiung says the women continue to suffer the effects of the torture.

"The war hasn't really ended for any of the survivors, and that's what I was really interested in documenting." 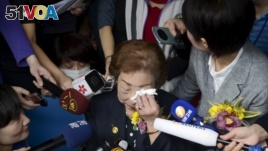 Former comfort woman Chen Lien-hua, center, wipes tears as she talks to media during a ceremony unveiling the nameplate of a museum dedicated to Taiwan's "comfort women" on International Women's Day, in Taipei, Taiwan, March 8, 2016.

The documentary tells about the lives of Grandma Adela in the Philippines, Grandma Gil in South Korea and Grandma Cao in China. They were among the reported 200,000 girls and young women across Asia who were known as "comfort women." They were reportedly kidnapped by the Japanese army and held in what were called "comfort stations." There, the women say they were regularly raped as well as abused in other ways.

The reports are disputed in Japan. Some Japanese officials have even tried to get changes made to school history books in their telling of the period. Some officials suggest the women volunteered to work providing sex to soldiers.

For 20 years, surviving comfort women and their supporters in South Korea have gathered every week at the Japanese Embassy in Seoul to demand an official public apology. They want Japan to accept responsibility for what they say happened to them. They also want the Japanese government to pay the victims for wrongdoing.

In 2015, then-South Korean President Park Geun-hye and [Japanese] Prime Minister Abe reached an agreement on the issue. But both the comfort women and current South Korean President Moon Jae-in have rejected the agreement. It included a statement of apology by Abe and an $8-million donation to a fund for the victims.

Grandma Gil is a leading activist seeking justice for the survivors. In the film, she is shown speaking in Japan. She is publicly criticized by conservative protesters who call her a prostitute. But she is also warmly welcomed by teenage girls at a school who cried when they heard her story.

She told the girls: "For over 70 years I have not lived like a normal person. Would the wound go away if you apologize? No. The scars will remain but my heart can heal. I am waiting for that day."

On the 70th anniversary of the end of World War II, Prime Minister Abe expressed sympathy to victims of Japan's military aggression. But he said, "generations not involved in the conflict should not be burdened with continued apologies."

Hsiung said her documentary is not an attempt to place guilt on Japan forever. She says she just wants Japan to admit the truth and learn from the past.

"Just because everyone who has been responsible for that, and committed that, have all passed away, you know, it doesn't mean that that history and those atrocities get lost."

The documentary shows both the support South Korean comfort women receive and the lack of support and isolation for survivors in China and the Philippines. It notes that China's restrictive political environment has made it difficult for supporters of the comfort women to organize.

Hsiung said during the filming of the documentary she helped comfort women meet others who had also been abused. In one part, Grandma Adela is encouraged to speak about her experiences when she watches a video of a comfort women gathering in Seoul.

"I think when people get to see that they are not alone, it is not an isolated issue, it's not just in their village, it's not just this one grandmother. When they see that it is part of a bigger thing, they feel more inclined to participate, to talk about and to share what they know."

VOA Asia Correspondent Brian Padden reported this story from Seoul. He had reporting help from Youmi Kim. Christopher Jones-Cruise adapted the report for Learning English. Caty Weaver was the editor.

scar – n. a feeling of great emotional pain or sadness that is caused by a bad experience and that lasts for a long time

burden – n. someone or something that is very difficult to accept, do or deal with

participate – v. to be involved with others in doing something; to take part in an activity or event with others