Update Required To play the media you will need to either update your browser to a recent version or update your Flash plugin.
By Caty Weaver
22 March 2021


A fire in Bangladesh Monday destroyed hundreds of shelters at the Rohingya refugee camp near Cox's Bazar. Thousands of people are now without homes, officials and witnesses said.

Mohammad Shamsud Douza is a top official with the government's Refugee, Relief and Repatriation Commission. He said the fire at Balukhali camp broke out late in the day and spread quickly through at least four blocks. He said at least four teams of firefighters were struggling to control the fire.

Louise Donovan, a spokeswoman for the United Nations refugee agency, said in an email that fire services, rescue and emergency workers and volunteers deployed to help. 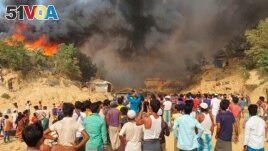 "So far the fire has affected shelters, health centers, distribution points and other facilities. Volunteers are supporting those affected," she said.

Rohingya refugees in the camps said many homes were burned down and several people had died, but neither officials nor the UN could confirm the reports. The cause of the fire has not been established.

Zaifur Hussein is a 50-year-old Rohingya refugee who escaped the fire but lost his home. He told the Reuters news agency, "When we were in Myanmar we faced lots of problems... they destroyed everything... Now it has happened again."

Bangladesh shelters more than one million Rohingyas. Most fled Myanmar in August 2017 when its military began to attack the minority Muslim population, killing and raping many people and burning whole villages. The U.N. has described the country's action as genocidal. Myanmar denies the accusation.

Bangladesh wants to begin sending the refugees back to Buddhist-majority Myanmar. Several attempts to do so under a joint agreement failed because the Rohingya refused to go. They fear they will face more violence in Myanmar. The country denies them basic rights including citizenship.

In January, a fire also destroyed hundreds of poor, temporary homes in the camp, leaving thousands without shelter.

The Associated Press reported this story. Caty Weaver adapted it for VOA Learning English. Hai Do was the editor.

distribution –n. the act of giving or delivering something to people

facility –n. something (such as a building or large piece of equipment) that is built for a specific purpose