Update Required To play the media you will need to either update your browser to a recent version or update your Flash plugin.
By Andrew Smith
20 November 2022

The new batteries could help bring more electric vehicles, or EVs, to the market and reduce China's lead in battery production.

Today's EVs run on lithium-ion batteries which cost about $10,000 to $12,000 to make. They are mostly made with lithium, cobalt, manganese and nickel. And the materials have increased in price during the last two years. 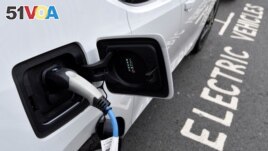 The new batteries under development could cost one-third to two-thirds less. But their promise depends on overcoming difficulties in working with the materials. Sodium does not hold as much energy, while sulfur can easily damage key parts of a battery.

Still, companies have brought in millions of dollars and government support to develop new kinds of batteries - called sodium-ion or lithium-sulfur.

Several firms in the United States, Germany, and Norway are developing lithium-sulfur batteries that do not need the costly nickel or cobalt. They include Lyten and Conamix in the U.S., Germany's Theion and Norway's Morrow.

Ulrich Ehmes is the chief executive of Theion in Berlin, Germany. He says sulfur is so corrosive that it kills a battery after 30 charges. But he said the company has developed a way to protect the lithium-sulfur electrode so it can last an EV's lifetime. An electrode is an element through which electricity flows into or out of a battery or other device.

"It's cheap, it's high energy density, so it seems to be a no-brainer," Ehmes said.

Ehmes said the company plans to begin tests with automakers in 2024. And he expects the first production for EV use around 2027.

U.S.-based Amandarry and British company AMTE Power are developing sodium-ion batteries. They do not need cobalt, nickel, and even lithium which are the three most expensive battery materials.

Sodium-ion batteries could be useful for EVs that require less power.

Amy Chen is an executive at Amandarry. She said the first use of its batteries will likely be electric two-wheelers. In addition to lower cost, Chen said Amandarry's batteries can charge really fast — 80 percent in 15 minutes.

AMTE Power chief Kevin Brundish said his company is planning to launch its batteries for storage systems where energy demand is lower.

Some Asian firms are also working on these new kinds of batteries.

Some automakers are testing new types of batteries and keeping an eye on their development.

"Over time, more (battery) chemistries will come out," said Linda Zhang, chief engineer on Ford's F150 Lightning electric truck. "It would be silly not to take advantage of those chemistries."

corrosive–adj. able to destroy a solid material by a chemical reaction

no-brainer --adj. erstood or easily decided upon because of a clearly better choice

take advantage of -adj. use something for one's benefit or benefit from a good opportunity