Update Required To play the media you will need to either update your browser to a recent version or update your Flash plugin.
By Jill Robbins
09 July 2021


Zaila Avant-garde is her name.

Murraya is the word.

The 14-year-old girl from Harvey, Louisiana, twirled and jumped after correctly spelling "m-u-r-r-a-y-a" to become the first African American winner in the 96-year history of the Scripps National Spelling Bee.

Zaila said she knew Black children were watching her and dreaming of following the same path. She even thought of MacNolia Cox, the first Black finalist at the 1936 competition. Cox was not permitted to stay in the same hotel as the rest of the spellers because of her skin color.

The competition has long been a setting for spellers from South Asian families. Up to now, the only Black winner was also the only champion from outside the United States: Jody-Anne Maxwell of Jamaica in 1998. And Zaila's win breaks a line of at least one South Asian winner every year since 2008. 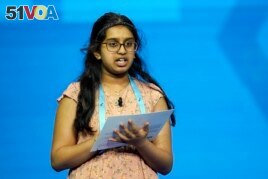 Chaitra Thummala, 12, from Frisco, Texas compete during the finals of the 2021 Scripps National Spelling Bee at Disney World Thursday, July 8, 2021.

"I'm hoping that within the next few years, I can see a little bit of an influx of African Americans, and not many Hispanic people, either, so I'm hoping to see them there, too," Zaila said.

She has described spelling as something she does on the side, although she regularly practiced for seven hours a day. She is also a star basketball player who holds three Guinness world records for dribbling several balls at one time. She hopes to play someday in the Women's National Basketball Association (WNBA).

Many of the top spellers started competing at a young age. But Zaila started just two years ago.

On Thursday night, she said knew all the words including "murraya" which means a genus of tropical Asiatic and Australian trees. Only one word gave her any real trouble, "nepeta," a kind of Old World mint plant, and she jumped even higher when she got that one right than she did when she won the competition.

This spelling bee was different from any that came before because of the coronavirus pandemic. Only spellers' close family members could attend. Normally, hundreds of fans and former spellers watch the bee in person. This year the bee was moved to Florida, and only the top 11 spellers competed in person.

Five of the 11 finalists were gone after the first set of questions, and Zaila became the champion in just under two hours. Zaila will take home more than $50,000 in cash and prizes.

Jill Robbins adapted this story by Ben Nuckols of the Associated Press for Learning English. Hai Do was the editor.

bee – n. a gathering of people for the purpose of spending time together while working on similar projects; often used to describe a spelling competition

dribble – v. to move a ball or puck forward by tapping, bouncing, or kicking it

twirl – v. to turn or spin around and around

genus – n. a group of related animals or plants that includes several or many different species

What do you think of the Spelling Bee winner this year? We want to hear from you. Write to us in the Comments Section.