Update Required To play the media you will need to either update your browser to a recent version or update your Flash plugin.
By Bryan Lynn
16 September 2021


A private space flight launched by America's SpaceX has carried the first all-civilian crew into orbit.

The four civilian passengers are traveling on SpaceX's fully automated Dragon spacecraft, or capsule. They are on a three-day trip orbiting the Earth. The capsule launched Wednesday on top of one of SpaceX's reusable Falcon 9 rockets from Kennedy Space Center on Florida's Cape Canaveral.

The trip, named Inspiration4, marks SpaceX's first flight for private passengers. It is the first time a spacecraft has orbited Earth carrying a fully civilian crew. The capsule has already been in orbit. It was used for SpaceX's second astronaut flight for the U.S. space agency NASA to the International Space Station (ISS). 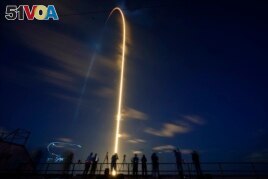 The spacecraft was expected to reach an altitude of 575 kilometers above Earth. That is higher than the ISS and just above the current position of NASA's Hubble Space Telescope.

The flight is being led by 38-year-old American businessman Jared Isaacman, who used his own money to pay for the trip. With a lifelong interest in flying, Isaacman has flown fighter jets and started a company to train others to do so. But he is not a professional astronaut.

Isaacman organized the flight as an effort to raise money for one of his favorite causes, St. Jude Children's Research Hospital in Memphis, Tennessee. The hospital treats child cancer patients. When announcing the flight in February, he promised the hospital $100 million and aims to raise another $100 million in donations.

Isaacman offered one seat on the spacecraft to Hayley Arceneaux, a former patient at St. Jude. Now 29, Arceneaux was 10 years old when doctors discovered she had bone cancer. The disease led to a medical operation that replaced her thigh bone. She is the first person in space with a prosthesis. Arceneaux said she is happy to represent "those who are not physically perfect."

Arceneaux went on to become a physician's assistant at St. Jude. She will also be the youngest American to travel into space. She takes this honor from the late Sally Ride, who became the first American woman in space in 1983 at age 32.

The flight's other two passengers were chosen through competitions organized by Isaacman.

One of those winners is Sian Proctor, a 51-year-old community college teacher from Phoenix, Arizona. She is also a pilot and was a NASA astronaut finalist candidate about 10 years ago.

The other passenger is 42-year-old Chris Sembroski, a data engineer from Everett, Washington. He is a former U.S. Air Force member who has experience with flying and missile systems. Sembroski was chosen from a group of 72,000 St. Jude donors who took part in a lottery for the seat. The effort raised $113 million.

The four passengers spent months in intense training before the flight. This included altitude exercises, simulator training, experiences with weightlessness and rides in fighter jets.

The crew plans to perform a series of medical experiments during the trip. The members said in a statement they hope the experiments can lead to a better understanding of "human health on Earth and during future spaceflights."

The SpaceX flight follows recent civilian space trips carried out by two other private companies: Virgin Galactic and Blue Origin. Those flights, however, were piloted by professional astronauts. The trips did not enter Earth orbit but passengers were able to experience weightlessness and observe Earth for a few minutes before returning home.

Bryan Lynn wrote this story for VOA Learning English, based on reports from The Associated Press and Reuters. Mario Ritter, Jr. was the editor.

automated – adj. fully controlled by machines and not people

altitude – n. the height of something above sea level

prosthesis – n. an artificial body part, such as an arm, foot or leg, that replaces a missing part

lottery – n. a contest in which tickets with numbers are sold to people who then have a chance to win a prize if their number is chosen