Update Required To play the media you will need to either update your browser to a recent version or update your Flash plugin.
By Bryan Lynn
04 January 2022


A former refugee has become the first Cambodian American mayor in the United States.

Sokhary Chau was chosen Monday by a majority of city councilors in Lowell, Massachusetts, to serve in the city's top position. He also became the city's first Asian American mayor. 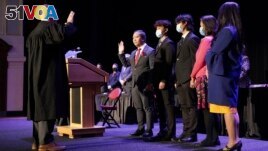 The 49-year-old Chau is a federal government employee who works for the U.S. Social Security Administration.

After being officially sworn in, Chau said, "God bless America, right? I was a refugee, now I'm mayor of a major city in Massachusetts." He added, "I don't know if that could happen anywhere else in the world. I'm still trying to absorb it."

He also spoke about his family's efforts to escape Cambodia under the extreme rule of the communist Khmer Rouge. Chau said his father, who was a captain in the Cambodian army, was executed by the Khmer Rouge in 1975 during the country's civil war.

He said that his mother, who died last year, was able to keep her seven children alive for four years, surviving "landmines, jungles, hunger, sickness and uncertainty" in order to get them safely to the U.S.

While living in refugee camps, Chau said his family imagined America as a nation with "streets paved with gold." While this was not true, he said the U.S. is a land that makes democracy possible through a system of "checks and balances." Chau said America also represents values such as fairness and equality.

Lowell, Massachusetts was an early center of America's cloth industry. Many immigrants from Europe and Latin America came to the city over generations. Today, the city's population of 115,000 is nearly 25 percent Asian. Lowell is also home to the nation's second-largest Cambodian community after Long Beach, California.

Chau is among a growing list of Cambodian American officeholders in Massachusetts. The state has at least two other city councilors, a school committee member and two state lawmakers. All of them are from Lowell.

"As a proud Cambodian American, I am standing on the shoulders of many immigrants who came before me to build this city," Chau said.

Chau's family first settled in the city of Pittsburgh, Pennsylvania when he was nine years old. They received assistance from the Catholic Church and this experience led the family to become Christians.

His family arrived in Lowell in the mid-1980s and some of Chau's older brothers and sisters got jobs in local factories. Chau decided to continue his studies and later earned a scholarship to attend school in nearby Andover. Later, he was accepted to Macalester College in St. Paul, Minnesota, where he received another scholarship. He studied economics and political science.

Before running for office, Chau worked mostly in the financial services industry.

His election comes after Michelle Wu was sworn in as the mayor of Boston last November. Wu's parents immigrated to the U.S. from Taiwan. She is Boston's first woman and first person of color elected to the office.

absorb – v. give full attention to something

jungle – n. an area of land, usually in tropical countries, where trees and plants go close together

uncertain – adj. not sure or not able to decide about something

pave – v. to cover a path or road with stones, bricks, concrete, etc.

check – n. something that stops or limits another thing