Update Required To play the media you will need to either update your browser to a recent version or update your Flash plugin.
By Anna Matteo
01 October, 2014


Ebola has arrived in the United States. But the arrival was not on a flight specially designed to deal with a deadly, contagious disease. It was on a normal flight from Liberia.

Doctors in Dallas, Texas, say they have identified the first case of Ebola in the United States. They did not release the identity of the patient. The person appears to have arrived on a flight from Liberia earlier this month but showed no signs of illness until a few days later.

The director of the U.S. Centers for Disease Control and Prevention is Thomas Frieden. He says the patient infected with the Ebola virus was healthy when he or she left Liberia and while on the flight to the United States. 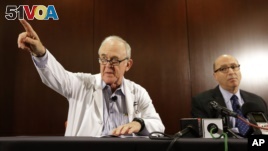 Dr. Frieden says that until the signs, or symptoms, appeared, the person did not present a threat of infection to anyone else. He says officials are now trying to identify anyone who may have had contact with the infected person during the period when the symptoms appeared to the time the patient went to Texas Health Presbyterian Hospital in Dallas for treatment.

Those people will be closely observed for a few weeks to make sure they did not become infected with the disease.

A hospital spokesperson says the infected patient is in intensive care. But they would not provide any more information because of concern for the individual's privacy.

Doctors working on this case say Ebola can be contained easily. They say good public health methods and immediate quarantine of anyone showing symptoms can help. They also suggest observing people with whom a patient has had contact.

Dr. Frieden says the virus cannot be transmitted through the air. He says a person can only get Ebola through direct contact with bodily fluids from an infected person who is showing symptoms.

"While we do not currently know how this individual became infected, they undoubtedly had close contact with someone who was sick with Ebola or who died from it."

Early symptoms of Ebola include fever, sore throat and muscle pain. As the disease progresses, it can cause bleeding and organ failure.

The World Health Organization says more than 3,000 people have died from Ebola in West Africa. An international effort is under way to stop the spread of the deadly virus.

Anna Matteo adapted this story for Learning English from a report by Greg Flakus. It was edited by Mario Ritter.

contagious- adj. able to be passed from one person or animal to another by touching or other means; easily spread

infected- adj. being sick with something that causes disease

symptoms-n. a sign that something, usually a disease, is present; "The patient showed symptoms of being infected with the virus."