Update Required To play the media you will need to either update your browser to a recent version or update your Flash plugin.
By Bryan Lynn
20 June, 2018


Computers are increasingly competing against humans to see whether man or machine is smarter.

In the latest demonstration of artificial intelligence or AI, a computer went up against humans in live, public debates.

The debates – held this week in San Francisco – provided a new example of how computers are fast improving to think and sound more like humans.

The event was a demonstration of an AI system developed by major technology company IBM. It is called Project Debater.

IBM said it was the first time ever that an AI system has competed in a live, public debate with humans. Two separate debates were held between a computer and two human debaters.

The company preselected possible subjects for discussion, but said neither the computer nor the humans knew the chosen subject before the debate.

The discussions were set up in a similar way to most political debates. After preparing arguments, both sides got the chance to present a four-minute opening statement. Then came four-minute rebuttals, followed by closing statements.

In one debate, IBM's computer battled Noa Ovadia, a former national debate champion for Israel. The debate was based on the following statement: "We should subsidize space exploration."

The AI system made a case in favor of government-subsidized space research. The computer was represented at the event as a tall and thin black box, with a small screen in front that changed designs when speaking and listening. It spoke in a female voice.

"Thank you for the opportunity to speak today."

The AI system pulled in evidence from its huge supply of information from newspapers, journals and other sources.

Ovadia took the opposite position, arguing that the government could better serve the people by providing financial assistance for programs other than space exploration.

"You are speaking at the extremely fast rate of 218 words per minute. There is no need to hurry."

Project Debater then launched its rebuttal speech. It argued that government spending on space would be "a very sound investment" because it would be great for the economy, technology, and society as a whole.

The rebuttal ended with the machine stating that "subsidizing space exploration is like investing in really good tires." The AI system explained its reasoning. While no one really wants to spend money on tires, people decide to do so in the end because it is the best and safest decision. 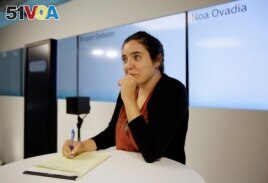 Following closing statements from both sides, reporters and other attendees gave their opinions on the results. IBM reported that a majority of those who watched the debate said they believed Project Debater had improved their knowledge of the subject more than the human debater.

On the other hand, the human debater got praise for better communicating her ideas. IBM's vice president of AI research, Dario Gil, told the Associated Press this was not that surprising. He said humans are generally better at "using more expressive language, more original language."

Ovadia said her AI opponent showed surprising language ability in constructing sentences. She added that the computer was not only able to "get to the bottom" of her arguments, but also able to intelligently answer them.

"Thank you for listening."

Among several outside experts invited to attend was Chris Reed. He directs the Center for Argument Technology at the University of Dundee in Scotland. Reed said the computer effectively used a debating method that predicts an opponent's argument and rebuts it before it is brought up.

The event included a second debate about whether technology should be used to help doctors treat patients living far away across the world. 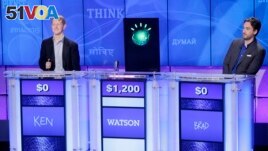 "Jeopardy!" champions Ken Jennings, left, and Brad Rutter, right, look on as IBM's Watson computer beats them to answer a question during a practice round of the "Jeopardy!" quiz show in Yorktown Heights, N.Y., on Jan. 13, 2011. (AP Photo/Seth Wenig)

An IBM research team based in Israel has been working on Project Debater for six years. It was launched after IBM's Watson computer system beat two humans competing on the knowledge game show "Jeopardy" in 2011.

But IBM officials say Project Debater goes beyond its Watson technology to explore new AI territory. It is designed not only to process large amounts of data in an effort to outsmart an opponent. It can also help people create persuasive arguments and make well-informed decisions.

The company says Project Debater's methods will eventually be offered in its IBM Cloud and IBM Watson businesses.

The debate came about a month after Google demonstrated how its AI system was able to make a haircut appointment in a very human-like way. Earlier in the year, AI- machines outperformed humans in a high-level reading test.

Bryan Lynn wrote this story for VOA Learning English, based on reports from IBM, the Associated Press and other sources. Hai Do was the editor.

What are your thoughts on the new developments in computers getting better at competing directly with humans? Write to us in the Comments section, and visit 51VOA.COM.

rebuttal – n. statement that a claim or criticism is not true

subsidize – v. help pay for the costs for something

screen – n. flat surface on a computer on which pictures or words are shown

original – adj. the first one made, not a copy

persuasive – adj. able to cause people to do or believe something