First Flight Completed of Plane with No Moving Parts

Update Required To play the media you will need to either update your browser to a recent version or update your Flash plugin.
By Bryan Lynn
28 November, 2018


Engineers say they have carried out the first-ever flight of an electric airplane with no moving parts.

Researchers at the Massachusetts Institute of Technology, or MIT, recently shared video of the successful test flight. They also reported their results in the scientific journal Nature.

An airplane usually requires fast-turning turbines to create the necessary thrust and power to lift the plane off the ground and stay in the air.

But MIT researchers say they have created a new air vehicle that powers itself without this kind of engine. In fact, the plane was designed to have no moving parts at all.

Engineers say that developing and expanding such technology could greatly change the future of flying. It could lead to the creation of planes that are safer, quieter and easier to take care of. Such planes would also not produce emissions that harm the environment.

Steven Barrett is a professor of aeronautics at MIT. He helped lead the plane's development. He said the successful tests have opened up "new and unexplored possibilities" for future aircraft.

Barrett says he first got the idea for planes without moving parts from watching "Star Trek." He told MIT News he imagined that futuristic air vehicles such as the ones created for "Star Trek" could one day fly in the real world. Such vehicles had simple designs. They moved smoothly and silently.

The new technology is based on experiments that date back to at least the 1920s. Those early experiments dealt with a system used to create thrust called "ionic wind."

Ionic wind describes a wind, or thrust, that can be produced when electrical current is passed between a thin and thick electrode. If enough electricity is created, the air between the two electrodes can produce enough thrust to power a small aircraft.

MIT's experimental plane weighs about 2.5 kilograms. It was made to look similar to traditional aircraft. But instead of having engines attached under the wings, it contains a series of electrodes. The electrodes in the front are made of thin wire. In the back, they take the form of thicker airfoils.

The wires in front and airfoils in the back both carry high electricity – up to 20,000 volts each. The two create an electrical field of opposing forces that produce wind behind the plane to make it fly. 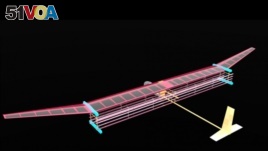 Pictured is a general blueprint for an MIT plane propelled by ionic wind. The system is likely to be used first to power small drones or lightweight aircraft. (MIT Electric Aircraft Initiative)

Barrett said his team dealt with several failed attempts during early test flights of the plane. But the team was finally able to complete a successful flight in which the aircraft traveled about 60 meters in 10 seconds. He added that the plane likely could have flown farther if the test had been carried out in a larger building.

Barrett says the experiment demonstrated the first continuous flight of a plane that is heavier than air, but has no moving parts. "This was the simplest possible plane we could design that could prove the concept that an ion plane could fly," he said.

Although the reported results could mark the beginning of major changes in the field of flight, Barrett said the current technology has shown limitations. "It's still some way away from an aircraft that could perform a useful mission," he said. "It needs to be more efficient, fly for longer, and fly outside."

One possible issue will be creating a battery that is powerful enough to operate much larger versions of such aircraft, without being too heavy to fly on the plane.

Barrett says the current limitations make it more likely the technology will first be used to create smaller air vehicles. One possibility would be a drone. Drone use, especially in large cities, is expected to greatly increase around the world in coming years.

The MIT team says it believes drone designs without moving parts would create vehicles that are nearly silent and less polluting than current models.

Bryan Lynn wrote this story for VOA Learning English, based on reports from MIT and Nature. Ashley Thompson was the editor.

thrust – n. the pushing of something suddenly and with force

emission– n. something being released, usually into the air

electrode – n. the point where an electric current enters or leaves something such as a battery

airfoil – n. the cross-sectional shape of a wing or blade used by a propeller or turbine

volt – n. unit of measurment for the force of an electric current

concept – n. an idea or principle

battery – n. object that provides and stores electricity for things

drone – n. a kind of small aircraft that flies without a pilot