Update Required To play the media you will need to either update your browser to a recent version or update your Flash plugin.
By Caty Weaver
17 October, 2018


On July 20, 1969, the world watched as black and white television images showed astronaut Neil Armstrong make history by stepping onto the moon.

Now, Armstrong's bravery, spirit of exploration and ability to deal with intense pressure is celebrated in a new movie about his life.

The movie First Man is based on James Hansen's book, First Man: The Life of Neil A. Armstrong. Academy Award-winning director Damien Chazelle directed the film.

The Apollo 11 moon landing is the high point of First Man. Using sound, music and close-up images, Chazelle lets the audience see the punishing training, deadly technical failures and personal sacrifices that led to the first step on the Moon's surface.

Actor Ryan Gosling plays Armstrong, who leads the moon mission while still mourning the recent death of his daughter. He struggles with the risks of space travel as a husband and father.

Claire Foy plays Janet Armstrong as a firm, calm and supportive wife who tries to accept the danger her husband faces. She demands that he be honest with their young sons before he leaves for the rocket launch. She says he must tell them that he might not return. 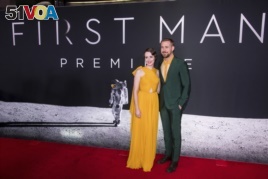 Claire Foy and Ryan Gosling attend the 'First Man' premiere at the National Air and Space Museum of the Smithsonian Institution, October 4, 2018.

The film had its premiere, or first official showing, at the Smithsonian Institution's National Air and Space Museum in Washington, D.C. Gosling told VOA he was deeply affected by the museum's flight and space exploration collection.

"I was so excited when they picked here to have the premiere. It seemed like such a perfect place to do it. It's my first time here, and I hope I get a chance to see it."

Foy was also moved seeing a real space shuttle, astronaut uniforms and other objects that had been re-created for the film.

"It's kind of a firsthand experience of what these missions were like for these men and these families."

During the premiere, Chazelle told VOA he sought to tell the real story of, in his words, "these ordinary human beings throughout these extraordinary circumstances."

"...Sacrificing everything, putting their lives on the line, and giving up so much, so that we can benefit from living in a world where we know humans have that potential."

Chazelle is known for placing great importance on sound and music in film. His Oscar-winning films Whiplash and La La Land are examples of that interest.

The music for First Man, from Academy Award-winner Justin Hurwitz, communicates the excitement of the Apollo 11 mission and the emotional days surrounding it.

Chazelle said, "Sound and music were both instrumental at this movie. We wanted you, the audience, to feel that you had never been to space quite this way before, and also find a way to link space to the home front."

mission -n. a flight by an aircraft or spacecraft to perform a specific task

benefit -n. a good or helpful result or effect

circumstances -n. the way something happens : the specific details of an event

uniform -n. a special kind of clothing that is worn by all the members of a group or organization (such as an army or team)

audience -n. a group of people who gather to listen or watch something