Update Required To play the media you will need to either update your browser to a recent version or update your Flash plugin.
By Bryan Lynn
08 April 2022


An astronaut crew of private citizens has launched to the International Space Station (ISS).

The launch happened Friday morning from Florida's Kennedy Space Center. The flight is the first to be organized and operated by a private company involving a completely commercial astronaut crew.

The four-member team will travel to the ISS inside a Crew Dragon Endeavor spacecraft built by American company SpaceX. The spacecraft will be carried into space by a SpaceX Falcon 9 rocket. It is expected to arrive at the ISS about 28 hours after the launch. 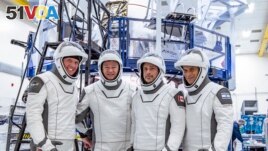 The crew members are from the private company Axiom Space, based in Houston, Texas. The group is led by retired NASA astronaut Michael Lopez-Alegria. The mission is called Ax-1.

The 63-year-old Lopez-Alegria is described as the mission commander. He is Axiom's vice president of business development. Lopez-Alegria will be joined by the mission pilot, Larry Conner, a businessman and private pilot from Ohio. Conner is in his 70s, but the company did not provide his exact age.

The other members of the crew are 64-year-old Israeli fighter pilot Eytan Stibbe and 52-year-old Mark Pathy, a Canadian businessman. Stibbe and Pathy will serve as mission specialists.

The private crew is expected to spend eight days aboard the orbiting ISS. NASA said it will cooperate with Axiom mission officials to plan joint activities involving the Axiom team and regular ISS crew members. Currently, there are three American astronauts aboard the ISS, along with a German astronaut and three Russian cosmonauts.

The launch is being praised by Axiom, NASA and industry officials as a turning point in the latest expansion of commercial space activities. Such activities have become known in the industry as the low-Earth orbit economy, or the "LEO economy."

In 2020, SpaceX became the first private company to launch astronauts into Earth's orbit. That mission sent two astronauts to the ISS. SpaceX has since completed several similar flights.

The latest mission's crew might seem similar to private space tourists who recently took space rides that did not reach orbit. Those services are offered by private companies Blue Origin and Virgin Galactic. The trips aim to fly private citizens to the edge of space and permit them to experience weightlessness and observe Earth.

But Axiom executives said their mission is very different. "We are not space tourists," Lopez-Alegria told a recent news conference. He added that the Axiom team had completed intense astronaut training with both NASA and SpaceX.

The Ax-1 team will be carrying equipment and supplies for 26 science and technology experiments. They include research in areas including brain and heart health, cancer and aging.

In the past, the ISS has accepted some visits by private citizens. But the current mission will mark the first all-commercial team of astronauts sent to use the station for its purpose as an orbiting laboratory.

Axiom's co-founder and executive chairman, Kam Ghaffarian, told Reuters he sees the launch as "the beginning of many beginnings for commercializing low-Earth orbit."

He added: "We're like in the early days of the internet, and we haven't even imagined all the possibilities, all the capabilities, that we're going to be providing in space."