Update Required To play the media you will need to either update your browser to a recent version or update your Flash plugin.
By Bryan Lynn
26 April 2022

The team flew to the ISS and back on the spaceship Crew Dragon. The SpaceX company vehicle landed as planned in the Atlantic Ocean off the coast of Florida on Monday. SpaceX also provided the Falcon 9 rocket that carried the team to orbit.

The return to Earth marked the end of a two-week science mission aboard the ISS. The flight was the first to be organized and operated by a private company involving a completely commercial astronaut crew. 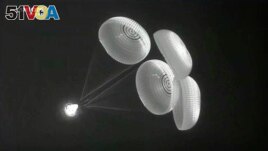 In this image from infrared video provided by SpaceX, the Dragon space capsule uses parachutes as it descends to the Atlantic Ocean off the Florida coast on Monday, April 25, 2022. (SpaceX via AP)

"Welcome back to planet Earth," SpaceX Mission Control said in a radio message to the crew. "We hope you enjoyed the extra few days in space."

The ISS mission was supposed to last just over a week. But weather conditions kept the crew in space for more than two weeks.

Before departing the space station on Sunday night, the group thanked their seven ISS hosts, including three NASA astronauts whose own mission will end soon.

The crew was led by Michael Lopez-Alegria, a retired astronaut for the American space agency NASA. He now works as the vice president of Axiom Space, which organized and operated the ISS mission.

The 63-year-old Lopez-Alegria was described as the mission commander. He was joined by the mission pilot, Larry Conner, a 72-year-old businessman and private pilot from Ohio. The other members were 64-year-old Israeli man Eytan Stibbe, a fighter pilot and 52-year-old Mark Pathy, a Canadian businessman. Stibbe and Pathy served as mission specialists.

After being helped out of the capsule, the crew members were picked up by a recovery ship and given a quick health examine. The team was then flown to NASA in Florida for more detailed medical check-ups.

"Everybody looks great and is doing reasonably well," Axiom operations director Derek Hassmann told reporters. He described the astronauts as being "in great spirits."

Connor called the experience an "amazing mission." Lopez-Alegria said his "adventure" aboard the ISS was "even longer and more exciting" than he imagined it would be.

Pathy said the mission was "eye-opening in so many ways," and would surely have "a lasting impact on my life."

The mission was praised by Axiom, NASA and industry officials as a turning point in the latest expansion of commercial space activities.

"We proved that we can prepare the crew in a way that makes them effective and productive on orbit," Hassmann said. "What it demonstrates to the world is that there is a new avenue to get to low-Earth orbit."

In the past, the ISS has accepted some visits by private citizens. But the latest mission marked the first all-commercial team of astronauts sent to use the station as an orbiting laboratory. The crew brought 25 science and biomedical experiments with them to carry out in orbit.

It was the sixth human spaceflight for SpaceX in nearly two years. The company has a contract to fly three more Axiom astronaut missions to the ISS over the next two years. Axiom's second flight is planned for next spring.

host – n. a person who organizes a party or special event

avenue – n. a possible way of doing or achieving something