Update Required To play the media you will need to either update your browser to a recent version or update your Flash plugin.
By Dan Novak
20 February 2022


A patient in the United States with the disease leukemia has become the first woman to be cured of HIV, the virus that causes AIDS.

The patient received stem cells from a donor. Stem cells are special cells that can become any kind of cell in the body. The donor was naturally resistant to HIV, researchers told reporters Tuesday.

The woman has been described as a 64-year-old woman of mixed race. Her case was presented at the Conference on Retroviruses and Opportunistic Infections in Denver, Colorado. 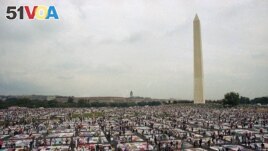 Thousands of people examine the individual panels of the AIDS quilt as it is displayed on the Mall in Washington on Sunday, Oct. 11, 1992. (AP Photo/Stephen R. Brown)

It is the first case involving the use of blood from the umbilical cord. The umbilical cord connects a pregnant mother to her fetus. Use of umbilical blood is a somewhat new method. Doctors are considering making the treatment available to more people.

The woman had been receiving the umbilical cord blood to treat her leukemia. Leukemia is a cancer that starts in blood-forming cells in bones. Since receiving the treatment, the woman has been in remission. She has been free of HIV for 14 months. She has not needed HIV treatments known as antiretroviral therapy.

The two earlier cases in which patients were cured happened in males who had received adult stem cells. Adult stem cells are often used in bone marrow transplants.

"This is now the third report of a cure in this setting, and the first in a woman living with HIV," said Sharon Lewin in a statement. She is soon to be the head of the International AIDS Society.

The woman's case is part of a larger study led by Dr. Yvonne Bryson of the University of California Los Angeles, and Dr. Deborah Persaud of Johns Hopkins University in Baltimore, Maryland. It is being financially supported by the U.S. government.

The study aims to follow 25 people with HIV who receive a transplant with stem cells taken from umbilical cord blood for the treatment of cancer and other serious conditions.

Patients in the study first receive treatment to destroy cancerous cells. Doctors then transplant stem cells from individuals with a genetic mutation which makes them resistant to HIV. Scientists believe the patients receiving the transplant will develop an immune system resistant to HIV.

Lewin said bone marrow transplants do not cure most people living with HIV. But she said the report "confirms that a cure for HIV is possible and further strengthens using gene therapy" as an effective way to cure HIV.

The study suggests that an important part of the treatment's success was using HIV-resistant cells.

"Taken together, these three cases of a cure post stem cell transplant all help" in discovering the parts of the transplant that were important to a cure, Lewin said.

Dan Novak adapted this for VOA Learning English from reporting by Reuters.

donor — n. a person who gives something (such as blood or a body organ) so that it can be given to someone who needs it

umbilical cord — n. a long, narrow tube that connects an unborn baby to the placenta of its mother

remission — n. a period of time during a serious illness when the patient's health improves

transplant— v.(medical) to perform a medical operation in which an organ or other part that has been removed from the body of one person is put into the body of another person

mutation –n. a change in the genes of a plant or animal that causes a different quality to be recognized

immune system –n. the system that protects the body from disease and infections