Update Required To play the media you will need to either update your browser to a recent version or update your Flash plugin.
By VOA
04 August, 2014
51VOA听写整理，转载请注明出处。文本仅供参考，欢迎纠错！

As the world population grows, there is a need for more food - including seafood. The World Bank predicts that by 2030, 70 percent of the demand for fish will come from Asian countries. The World Resources Institute recently studied world fish production.

The group says fish production needs to more than double by the middle of the century to meet that demand. It says the world's oceans, lakes and rivers are fished to their limit, and it says more fish must be produced in aquaculture projects or fish farms. 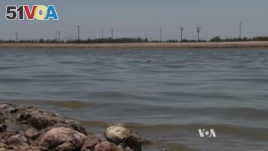 One such farm is operating in the California Community of Imperial. Imperial is 26 kilometers north of the border with Mexico. Craig Elliott is part owner of Imperial Catfish.

Mr. Elliott says that his business ships thousands of kilograms of fish every week to Asian grocery stores. Many people who go to those stores want to buy live fish.

"In fact, we can't really produce enough fish for the demand," Elliott said.

As the demand for seafood increases, so does the number of fish farms. Mike Velings launched Aqua-Spark, a company that invests money in aquaculture business.

"It's a relatively young industry but it grows at about 9 percent a year and we expect to keep that growth rate going in the next couple of decades," said Mike Velings.

Mr. Velings says China produces more fish on farms than any other country. He says there are very few fish farms in the United States.

"The U.S. relies heavily on wild caught and on imports and only one percent of the world's farming today is done in the U.S," Velings added.

Craig Elliott says it is not easy to operate a profitable aquaculture business.

"You put a fish in at this big and it's going to be 18 months to two years before they are two to three pounds and so you have all that big outlay and you have no return for a long long time. Some people make it, some of them don't," said Elliott.

There are also environmental concerns. Nathan Weaver is an environmental Activist. He says uneaten fish meal and waste products from farmed fish can be harmful to other creatures.

"Many of the species of fish we like to eat are large predatory fish, they are things like tuna or salmon that are already two or three levels up the food chain. So in order to farm these large carnivores you have to actually feed them smaller fish and the concern is that in order to keep a tuna farm or a salmon farm going you'll end up having to catch all the little fish in the ocean," said Weaver.

But the World Resources Institute says government policies, technology and private efforts have led to improvements in fish farms. It says one U.S. food store chain only sells fish from farms that do not use pesticides, antibiotics or added growth hormones.