Fishing for More Than Fish

Update Required To play the media you will need to either update your browser to a recent version or update your Flash plugin.
By Anna Matteo
25 August, 2018

On this program we talk about common expressions and phrases in American English.

Today, grab your poles and bait. We are going fishing!

Fishing is a popular outdoor activity you can do in lots of different places. You can go ice fishing, deep sea fishing, or fly fishing in a river, to name a few examples. 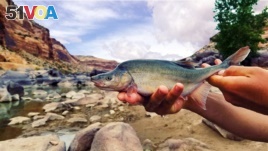 This undated photo provided by the U.S. Fish and Wildlife Service shows a humpback chub in the Colorado River in Colorado near the Utah border.

Whatever type of fishing you do, the equipment is similar. In addition to a fishing pole, you will need a fishing hook, a fishing line and sometimes, a sinker.

But in conversation, we don't use the expression "hook, line and sinker" when we are talking about catching a fish. We use it to describe fooling someone who is easy to fool. In other words, they are gullible.

But what about people who are not so gullible? When something sounds even the slightest bit fishy, they do not believe it. The word "fishy" means "likely untrue." In other words, something that sounds fishy sounds like a lie. For this one, we also say smells fishy – a phrase I think is even better.

Now, if you tell someone a fish story, you are telling them a story that is so strange or surprising that it seems very unlikely to be true. It is an exaggeration. We tell others fish stories when we want to brag or show off.

This expression comes from the fact that people who fish often say their catch is bigger than it really was.

But fish stories don't have to be about fish. We can exaggerate about anything. Take my friend, for example. He loves to tell people about the time he was attacked by a swarm of bees. Each time he tells the story, the amount of bees and bee stings increase. At last count, it was a million bees and thousands of stings. It's his very own fish story.

Now, back to real fishing for a minute.

Let's say you are planning a long, complicated fishing tour. This is not just a one- or two-day trip. It is a fishing expedition. You are not sure what you will catch. But you are going to spend a lot of time and effort trying to catch something.

For example, if a police detective is on a fishing expedition, she may ask all the people who were near a crime in their neighborhood. She does not know if any of them are guilty or if they know anything. But she hopes one of them will give evidence about the crime.

Now, you can "fish" for many other things too.

A writer can fish around for a good story idea. She may ask many people lots of general questions about their lives before finding something interesting to write about.

And let's say your co-worker asks you a lot of questions about your personal life. He does not have a clear reason why. He just seems to be fishing around for information. It makes you more than a little uncomfortable.

And it should! That's the thing with this expression. When we go fishing for information or evidence or whatever, we do plan to use it. In fact, we can also fish for something to feel better about ourselves.

If I am fishing for compliments I want you to say something nice about me. So, for example, let's say I give you one of my homemade chocolate chip cookies. As you take a bite, you make sounds that show you really like it. Then I ask, "So, how are my cookies?" I know they taste great. I'm just fishing for compliments.

Usually people who fish for compliments annoy others. But in this case, you probably will not feel annoyed. After all, you get to eat a delicious cookie!

Speaking of delicious food, fried fish can also be very tasty. The fish is dipped into a batter and then fried in oil. The bigger the fish, the better!

Now, let's hear these expressions used in a conversation between two, um, co-workers, you could say.

Hey. Did you bring another flashlight? My batteries are low.

Of course. I always bring an extra one, just in case. But I also have extra batteries if you want those instead.

Just give me the flashlight.

Isn't it helpful that I'm so prepared?

Yes, it is. Now stop fishing for compliments and hand me the screwdriver. We have don't have much time to open this lock!

Hey, can I ask you something? Yesterday, Joe from the cafe asked me a lot of questions. I got the feeling he was fishing for information about our ... you know, job. Do you think he knows something?

Joe? He doesn't know a thing. What did he ask you?

He wanted to know what I did during the day and how I spend my nights. And then he asked me what I was doing tonight. It was weird.

Sounds like he was just on a fishing expedition. But you know, he also asked me about my plans tonight.

What did you tell him?

I told him I was going to a book club.

A book club? Really? And he fell for that?!

Yeah, he fell for it hook, line and sinker. Didn't doubt it for a minute.

You don't think that excuse sounds kind of fishy? I think it sounds very fishy.

I didn't mean to judge you.

Look, just forget about it. Right now, we have bigger fish to fry.

What do you mean?

"This is the police! We have you surrounded! Come out with your hands up!"

Oh no! The police!

And that brings us to the end of Words and Their Stories.

If you liked this week's story about fish expressions and our conversation between two bank robbers, let us know in the Comments Section.

Don't worry. We're not fishing for compliments. We just want to know what type of stories you like!

You and me goin' fishing in the dark

Lying on our backs and countin' the stars

Where the cool grass grows.

Down by the river in the full moonlight,

We'll be fallin' in love in the middle of the night ...

Anna Matteo wrote this story for VOA Learning English. Kelly Jean Kelly was the editor. The song at the end is The Nitty Gritty Dirt Band singing "Fishing in the Dark."

bait – n. something (such as a piece of food) that is used to attract fish or animals so they can be caught

hook – n. a curved or bent tool for catching, holding, or pulling something

sinker – n. a weight used for holding a fishing line or net underwater

exaggeration – n. to think of or describe something as larger or greater than it really is

brag – v. to talk about yourself, your achievements, your family, etc., in a way that shows too much pride

show off – v. a person who tries to impress other people with his or her abilities or possessions

swarm – n. a very large number of insects moving together

expedition – n. a group of people who travel together to a distant place

batter – n. a mixture of flour and a liquid (such as egg, oil, or water) that is used to cover food before it is fried