Five Countries Where People Have Confidence in Trump

Update Required To play the media you will need to either update your browser to a recent version or update your Flash plugin.
By Bruce Alpert
08 July, 2017


Only one in five people in 37 nations are confident President Donald Trump will do the right thing when it comes to international issues.

But the United States president enjoys strong support from people in five countries – the Philippines, Vietnam, Nigeria, Israel and Russia.

The information comes from a recent poll of over 40,000 people living in 37 countries by the Pew Research Center of Washington D.C.

In the Philippines, 69 percent of people said they are confident Trump would do the right thing when it comes to international issues. In Vietnam and Nigeria, the percentage is 58 percent. Former President Barack Obama had the confidence of even higher majorities in the three countries.

Trump also has the confidence of a majority of people in Russia and Israel. 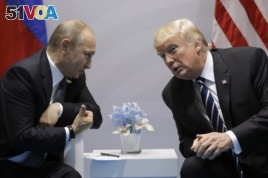 Most support in Philippines

It is in the Philippines that people gave Trump the highest confidence ratings.

Philippine President Rodrigo Duterte and Trump have enjoyed good relations. Both are known for strongly criticizing political opponents, even when doing so is controversial.

In an April telephone discussion, Trump praised Duterte for doing an "unbelievable job on the drug problem," according to a Philippine government report of the discussion.

Duterte is accused by international human rights groups of supporting a campaign of killing drug suspects in the Philippines. His government has denied the charges. But Reuters reported that almost 9,000 people were killed in the Philippines since Duterte took office on June 30, 2016. Many of them were small-time drug users and dealers,

While a large majority of Filipinos has confidence in Trump's ability on international issues, Pew said 68 percent disagreed with Trump's decision to pull out of the Paris climate change agreement.

Communist Vietnam has gone from being a Cold War enemy to an important ally to the U.S. in Southeast Asia. Both countries have shared concerns about China's increased influence in the region.

Vietnam and China have competing claims over the South China Sea, but the disputes have grown worse in recent years. The U.S. has no territorial claims in the area. But the Trump administration has continued to send warships to protect freedom of navigation in the area.

On May 31, Trump met with Vietnamese Prime Minister Nguyen Xuan Phuc at the White House. The two leaders announced new trade deals between the two countries.

President Donald Trump walks Vietnamese Prime Minister Nguyen Xuan Phuc to his car following their meeting at the White House in Washington, May 31, 2017.

Sale of U.S. planes to Nigeria

Nigeria, like the Philippines, has also been known for strong, powerful leaders.

Unlike previous presidents, Trump has rejected critics who charge Nigeria's security forces with human rights violations. A few months ago, the Trump administration announced plans to sell high-tech airplanes to Nigeria for its campaign against Boko Haram Islamic extremists.

confident - adj. having a feeling or belief that you can do something well or succeed at something

according - preposition, as stated, reported, or recorded by someone

drill - v. to make a hole in something with a drill to pull out resources such as oil and natural gas

aircraft carrier - n. a ship big enough for airplanes to land and takeoff from its deck