Update Required To play the media you will need to either update your browser to a recent version or update your Flash plugin.
By Phil Dierking
31 August, 2018


Five American teenagers were officially named the 2018 National Student Poets on Thursday at a ceremony in Washington, D.C. The award is the highest honor for young poets in the United States.

The new class of poets include Alaxandra Contreras-Montesano, Heather Laurel Jensen, Darius Atefat-Peckham, Ariana Smith and Daniel Blokh. The students represent states from all over the country: Vermont, Arizona, Michigan, Nevada, and Alabama.

The teenagers were first chosen in August from among thousands of award-winning young poets in the United States.

No more than a pencil and paper

Virginia McEnery leads the Scholastic Art and Writing Awards, which plays a part in choosing the national student poets. She says poetry is powerful because it is open to everyone. 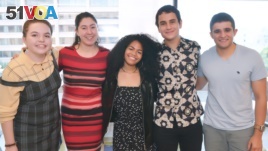 "It's so democratic, you don't need more than a pencil and piece of paper. It's a really good access point for young people."

McEnery says she hopes the national student poet program will support the winners not only as writers, but as activists. Many of the student poets have already held literary leadership positions, McEnery said.

"For many of them, they are already on the youth advisory council for their library or they're running the literary mag (magazine) for their school or one of them is actually very involved in running thescholastic awards program for her state."

As national student poets, the five young people will give presentations, performances and training on poetry and literature. They will also promote the services of libraries and museums, and volunteer in their communities.

In addition, each poet will receive a $5,000 academic award and the opportunity to learn from poet and teacher Glenis Redmond. And, they will meet with Tracy K. Smith, the current poet laureate for the United States.

McEnery says she has seen for herself how programs to support students' creative expression can change young people's lives.

"It's such a hard time to be a teenager, social movements are happening in real time as they are coming of age. What better, smarter, saner thing can a young person do than try to write about it?"

This story was reported by Phil Dierking for VOA Learning English. Kelly Jean Kelly was the editor.

Do you enjoy poetry? Have you ever presented your work? Write to us in the Comments Section or on 51VOA.COM.

academic - adj. or relating to schools and education

advocate - n. a person who argues for or supports a cause or policy

elastic - adj. able to be changed