Update Required To play the media you will need to either update your browser to a recent version or update your Flash plugin.
By Ashley Thompson
23 August 2021


American Harvey Sutton went to his first day of school last week. The 5-year-old boy had a lot to tell his teacher and classmates about his summer.

That is because Harvey just finished walking the entire length of the Appalachian Trail, one of the longest footpaths in the world. The 3,500-kilometer-long trail passes through 14 states in the eastern United States.

Harvey is one of the youngest people ever to walk the trail. He and his parents completed the trip in 209 days. 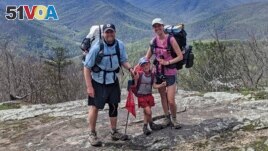 In this April 11, 2021, family photograph provided by Joshua Sutton, 5-year-old Harvey Sutton, center, poses with his mom Cassie, right, and dad Joshua, mountain top in Three Ridges, Virginia, while hiking the Appalachian Trail with his mom and dad.

It was hard work. But it was also fun. Harvey got to watch wild animals like frogs and lizards. He climbed over tall rocks. And he got to eat Skittles, a colorful sweet treat, to give him energy.

"The rock scrambles were really fun and hard. We were not bored," Harvey said from his home in Virginia, where he lives with his parents, Josh and Cassie Sutton.

His parents tried hard to keep their little boy happy and excited. In fact, they said, they had little time to pay attention to their own physical pain from walking so many kilometers.

"It gave us a bond and a strength that we hadn't realized before," Cassie Sutton said.

Other young children have hiked the trail, which starts at Springer Mountain, Georgia and ends atop Maine's Mount Katahdin. Even some babies have travelled the length with their parents.

Harvey was 4 years old when he and his parents began their walk in January. He turned 5 before the family completed the trip earlier this month in Maine.

He is several months younger than "Buddy Backpacker," a boy who once held the record for youngest person to complete the trail.

But the youngest of all may be Juniper Netteberg. The little girl finished the trail at age four with her parents and three siblings last October.

It may seem like an extreme activity for a child, but Dr. Laura Blaisdell sees no harm. She is a children's doctor and medical adviser to the American Camp Association.

Dr. Blaisdell said children are strong enough for the experience if parents attend to their child's usual social and emotional development.

Harvey's parents had been hiking with Harvey since he was two years old. Doing the Appalachian Trail seemed like a good next step.

It was a mostly smooth experience, the family reported. They slept in a tent, waking at 5:30 in the morning and walking all day. Their daily life was simple.

Josh Sutton said meeting and talking with other hikers along the way prevented boredom. They started calling his son "Little Man," early on the trip. Harvey's new name spread quickly among hikers all along the Appalachian Trail.

Karl Donus Sakas hiked with the family from Pennsylvania to the end of the trail in Maine. He helped the family keep Harvey interested by creating a treasure hunt with maps. Little Man found hidden playthings and brightly lit sticks along the trail.

Some other hikers gave Little Man toys, too, including a pet rock and Hot Wheels cars. At a Dollar General store, Harvey bought himself a calculator to keep track of all of the kilometers he had walked.

The Sutton family completed the hike August 9 atop Mount Katahdin in Maine. Now it is off to school for Little Man and back to work for his parents.

Harvey's trip earned praise from another hiker, Dale "Greybeard" Sanders. He is the oldest person to hike the trail, which he did at age 82.

"It's going to change his life forever, and his parents' life, too. The kid went through some hardships, but don't we all? Hardships make us stronger," said Sanders, now 86. "That kid is going to smile through life."

scramble - n. the act of moving or climbing over something quickly especially while also using your hands

excited - adj. very enthusiastic and eager about something

bond - n. something (such as an idea, interest, experience, or feeling) that is shared between people or groups and forms a connection between them