Floating Device Deployed off Chile to Protect Whales from Ships

Update Required To play the media you will need to either update your browser to a recent version or update your Flash plugin.
By Bryan Lynn
22 October 2022


A device floating in waters off the coast of southern Chile aims to collect data on nearby whales to protect them from passing ships.

The first electronic buoy was recently placed in the sea in the Gulf of Corcovado, about 1,100 kilometers from the capital, Santiago.

The device is designed to listen to the sounds whales make when they communicate with each other. The animals use sound to map their movements and to hunt. 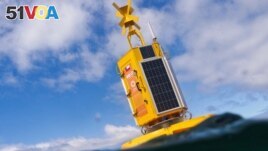 A buoy called 'Suyai,' designed to help avoid ship collisions with whales, floats at the 'Corcovado' gulf area in the coast of Chiloe, Chile, October 10, 2022. (Fundacion MERI/Handout via REUTERS)

The sounds are processed by artificial intelligence (AI)-powered computer systems in an effort to identify where the animals are. This information is then sent to shipping operators to help them avoid crashing into whales.

A non-profit organization called the Blue Boat Initiative put the buoy in place. The group seeks to develop and deploy technology tools to provide a warning system for shipping companies. In addition to helping protect whales, the "smart" buoy also collects data on the health of the ocean and the effects of climate change.

The group plans to place a series of buoys along the path whales take on trips from Antarctica to the equator. The Gulf of Corcovado is rich in sea life, including a large number of blue whales, as well as sei and Southern right whales. All these whales are listed as endangered under the Endangered Species Act. The area's whale population is largest during the summer season in the Southern Hemisphere.

In 2008, Chile banned whaling activities, including whaling for scientific purposes. The country has established a number of protected areas for whales and other endangered species.

"This is the beginning of a longer road," said Sonia Espanol, director of the Blue Boat Initiative. She noted that her team plans to cover the gulf with at least six buoys. "The idea is to be able to cover the entire migratory route of the whales from Antarctica to the equator," Espanol said.

The buoy works by using software called Listening to the Deep Ocean Environment (LIDO). The device continuously monitors ocean sounds. It uses AI to identify the kind of whales and where they are in real time. It then sends messages to nearby ships so they can reduce noise levels and try to avoid crashes.

The buoys also contain sensors to measure water temperatures, oxygen levels and more to predict ocean health and the effects of climate change. That information is expected to be used to help guide public environmental policies.

route –n. the way that something or someone regularly travels along

monitor – v. watch something carefully and record the results