Indonesia: Missing AirAsia Is Likely at the 'Bottom of the Sea'

Update Required To play the media you will need to either update your browser to a recent version or update your Flash plugin.
By George Grow
29 December, 2014


Indonesian officials say Australian searchers have seen objects floating in waters near the island of Borneo. The area is about 1,100 kilometers from the last known position of AirAsia flight 8501. But there is no confirmation that the material is related to the missing airplane. The search area is expected to expand to land areas at sunrise Tuesday.

The plane was carrying 162 people when it left Surabaya for Singapore on Sunday. But it disappeared about halfway through what is normally a two-hour flight.

The head of Indonesia's search and rescue agency says the missing Airbus A320 is likely at the "bottom of the sea."

The passengers include 149 Indonesians, three South Koreans and single passengers from Britain, Malaysia and Singapore. The seven-member crew included six Indonesians and a French co-pilot. 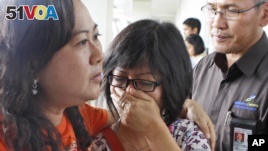 The pilot had asked air traffic controllers for permission to fly about 1,800 meters higher than normal to avoid stormy weather. An Indonesian Transport Ministry official says permission was denied because another plane was flying in the area. After that communication was silent. Controllers did not receive any calls for help from the pilot.

More than 400 rescued from burning ferry

At least five people are confirmed dead after a fire on a car ferry in waters near the coast of Greece. Officials announced that four bodies were discovered Monday on the Italian-flagged Norman Atlantic. The announcement came a day after one man was reported to have died.

Officials say more than 400 of the 478 passengers and crew have now been rescued. The ferry was carrying automobiles and passengers across the Adriatic Sea when the fire started. The boat had left the Greek port of Patras and was sailing to the Italian port of Ancona. Officials say the ferry had been inspected on December 19 and minor problems had been fixed.

Greece to call for early election

The Greek parliament has failed for the third time to elect a new president. Stavros Dimas, the government's presidential candidate, failed to win the required 180 votes.

Under Greek law, general elections must now be called. The vote in parliament Monday was seen as a final effort to avoid the vote, which could bring the Syriza party to power.

The European Union and International Monetary Fund fear Syriza would undo many of the country's economic reforms.

A South Korean official has offered to hold ministerial-level talks with North Korea to discuss what he called "mutual concerns." South Korea's unification minister, Ryo Kihl-jae, told reporters on Monday that a request had been sent to the North Korean government.

If agreed to, the talks would take place next month in Pyongyang.

The two countries had agreed on high-level talks two months ago. But North Korea refused to attend when activists in South Korea sent anti-North Korean materials across the border on balloons.

This report was based on stories from VOA's News Division and Correspondent Steve Herman in Bangkok. George Grow wrote this story for VOA Learning English. Jeri Watson was the editor.

waters - n. liquid that falls from the sky as rain or is found in lakes, rivers and oceans

car - n. a vehicle with wheels used to carry people; an automobile