Update Required To play the media you will need to either update your browser to a recent version or update your Flash plugin.
By Gregory Stachel
21 October 2021


Venice, Italy, is known for its beautiful buildings and waterways, or canals. But the way that the 1,600-year-old city was built makes it especially at risk of damage from sea-level rise.

Rising sea levels are increasing the number of floods during high tides. And for many years, Venice has been slowly sinking.

Climate scientists and world leaders plan to meet later this month in Scotland for a major United Nations climate conference. They will be thinking of the future of coastal cities like Venice.

Last month, the European Geosciences Union released a new study on Venice. It found that the Italian city could see a sea-level rise of 120 centimeters by the end of the century. That is 50 percent higher than the worst-case average that U.N. scientists have predicted for worldwide rising sea levels by 2100.

One of the most famous places in Venice is St. Mark's Basilica. The religious building sits at Venice's lowest area. It offers scientists a chance to observe the effects of rising seas on the city. The square floods during an 80-centimeter rise. Water gets into the building itself at 88 centimeters. 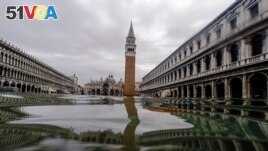 In this Friday, Nov. 15, 2019 file photo, a view of flooded St. Mark's Square in Venice, Italy. The square floods during an 80-centimeter rise. Water gets into the building itself at 88 centimeters. (AP Photo/Luca Bruno, File)

Carlo Alberto Tesserin is the building's chief caretaker. He told The Associated Press that flooding no longer happens from time to time. He said, "It is an everyday occurrence."

Floods above 1.1 meters are called "acqua alta," or "high water." Venice has experienced 163 such floods in the past 20 years. That is almost as many as the city faced during the 100 years before that.

Exceptional floods over 140 centimeters are also increasing. That mark has been hit 25 times since Venice started keeping records in 1872. Two-thirds happened in the last 20 years. One-fifth happened during a disastrous flooding period in late 2019.

The Venice Water Authority built a special system of moveable underwater barriers to help protect the city. The system is known as MOSE. The project cost nearly $7 billion. It has faced many years of cost overruns, delays and corruption and is still officially in the testing phase.

Since October 2020, MOSE's barriers have been raised 20 times. The system currently protects the cities from some but not all floods.

Elisabetta Spitz is one of the head officials of the project. She said the project's completion has been delayed until 2023. She said $580 million in spending for "improvements" will make sure of its long-term effectiveness.

Paolo Vielmo is an engineer. He notes that when MOSE was first proposed, sea-level rise was projected at 22 centimeters. That is far below U.N. scientists current worst-case prediction of 80 centimeters.

Current plans say that MOSE barriers will not raise for floods of 1.1 meters until the project receives final approval. That leaves St. Mark's Basilica in danger.

Annapaola Lavena has a business along the square in front of St. Mark's. She and other business owners there increasingly see themselves at the center of the climate crisis.

"The acqua alta is getting worse, and it completely blocks business. Venice lives thanks to its artisans and tourism. If there is no more tourism, Venice dies," she said.

"We have a great responsibility in trying to save it," Lavena added, "... but we are suffering a lot."

Colleen Barry reported this story for The Associated Press. Gregory Stachel adapted it for VOA Learning English. Ashley Thompson was the editor.

occurrence – n. something that happens

phase – n. a part or step in a process: one part in a series of related events or actions

contention – n. a situation in which you have a chance to win something that you are trying to win

responsibility – n. a duty or task that you are required or expected to do