Flooding in Yellowstone May Have Changed Park Forever

Update Required To play the media you will need to either update your browser to a recent version or update your Flash plugin.
By Bryan Lynn
17 June 2022


Severe flooding in America's Yellowstone National Park has caused widespread damage and may have resulted in permanent changes.

The recent floodwaters changed the path of a river popular for fishing. It also destroyed homes, bridges and roadways.

Yellowstone became America's first national park in 1872. It is known for its natural beauty that includes mountains, rivers and lakes. The forces of fire and ice shaped the park over thousands of years. It is a place where visitors can get close to different kinds of wildlife. 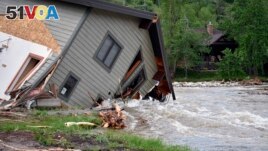 A house that was pulled into Rock Creek in Red Lodge, Mont., by raging floodwaters is seen Tuesday, June 14, 2022. (AP Photo/Matthew Brown)

Most of the 9,000 square-kilometer park is in the state of Wyoming. But parts of it also stretch into Montana and Idaho.

Flooding caused by heavy rains and melting mountain snow resulted in widespread destruction. It drove more than 10,000 visitors out of the park. The rain also damaged hundreds of homes in nearby communities. No one has been reported hurt. Yellowstone officials have said the park could remain closed for up to one week. Some entrances may not open all summer.

The chief administrator of Yellowstone is Superintendent Cameron Sholly. He told The Associated Press, "I've heard this is a 1,000-year event, whatever that means these days." He added that these kinds of weather events "seem to be happening more and more frequently."

The water washed away camp structures, flooded small towns and cut power to parts of southern Montana and northern Wyoming. The event happened as the park was beginning its busy summer season. Yellowstone receives millions of summer visitors. This year, the park is celebrating its 150th anniversary.

Some of the worst damage happened in the northern part of the park and nearby communities in southern Montana.

The Yellowstone River was running at a historically high level of 4.9 meters as it flowed past Billings, Montana's largest city. The city gets its water from the river and was forced to close its treatment plant because it cannot operate effectively with water levels that high.

Billings officials said the city only had a 24- to 36-hour supply of water. They were asking citizens to conserve water until the river could drop and the plant could restart operations.

"None of us planned a 500-year flood event on the Yellowstone when we designed these facilities," said Debi Meling, the city's public works director.

The sudden, severe flooding pushed a popular fishing river off its natural path, possibly permanently. It may also force park officials to rebuild destroyed roadways a safer distance away.

Yellowstone officials say the northern half of the park is likely to remain closed over the summer. This will greatly affect local economies that depend on summer tourists.

Bill Berg is a local government official in Park County, Montana. He told the AP that businesses in the town of Gardiner had just started to recover from the drop in visitors during the COVID-19 pandemic.

"It's a Yellowstone town, and it lives and dies by tourism, and this is going to be a pretty big hit," he said. "They're looking to try to figure out how to hold things together."

As the floodwaters ease, parks officials are turning their attention to the effort of rebuilding many kilometers of ruined roads and hundreds of washed-out bridges. Yellowstone officials say workers will not be able to fully investigate the damage until next week.

Kelly Goonan is a professor at Southern Utah University and an expert in running national parks and recreation areas. She said the rebuilding operation will take a very long time.

"This is something we're definitely going to feel the impacts of for the next several years," Goonan said.

conserve – v. to use something in a way that does not waste it

facility – n. part of a system or machine that makes it possible to do something

tourist – n. someone who visits a place for pleasure and does not live there

figure out – v. to finally understand something or someone after giving it a lot of thought