Update Required To play the media you will need to either update your browser to a recent version or update your Flash plugin.
By Pete Musto
25 August, 2019


Florida's famous palm trees are under attack from a disease that completely dries them out within months. And there is no chance for recovery once a tree gets sick.

The cause is an insect about the size of a piece of rice. It spreads the bacterial disease, known as lethal bronzing, by jumping from plant to plant.

Lethal bronzing has gone from a relatively minor issue on Florida's Gulf Coast to a nearly statewide problem in just over 10 years.

Tens of thousands of palm trees have died from the disease. And the rate of its spread is increasing, adding to environmental concerns of Floridians. The state is already struggling to save other plants, its famous citrus trees, from two other diseases.

Farms where the palms are grown, businesses and homeowners are taking a financial hit as they destroy infected trees. Some preventative measures can be taken, but once infected, digging up the tree is the only reasonable solution.

Brian Bahder studies plant diseases spread by insects. He is also a leader in the state's battle against lethal bronzing.

Bahder told The Associated Press that getting the disease under control is highly important because it could severely change the local environment. If nothing is done, he said, "I don't think all the palm trees will die, but the issue we see will get a lot worse before it gets better." 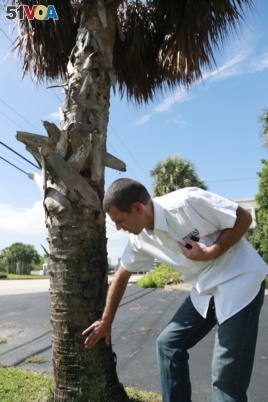 In this Wednesday, July 31, 2019, photo, Brian Bahder, assistant professor of entomology at the University of Florida, points to a cabbage palm tree that died from a lethal bronzing disease in Davie, Florida.

Experts say lethal bronzing likely came to Florida from Mexico. It also is found in parts of Texas and throughout the Caribbean.

Some worry it will spread to California and Arizona, infecting date palms and damaging that fruit crop. The disease has already heavily damaged coconut farms in Jamaica, and Brazil is taking preventative measures to avoid invasion.

Lethal bronzing is attacking palm trees right outside Bahder's office at the University of Florida's agriculture research station near the city of Fort Lauderdale. Some trees are dying, while others are dead. This gives him a laboratory to test ideas and make presentations, so he is not removing infected trees like many experts advise.

"To understand the disease, I need to watch it spread and see what it is doing," said Bahder, who is an assistant professor with the university.

Lethal bronzing's first Florida appearance was near the city of Tampa in 2006. But now it is found from islands off the state's southern coast to the city of Jacksonville in the north.

The only thing shown to pass the disease is haplaxius crudus, a small winged insect sometimes called the American palm cixiid or treehopper. There are other kinds of treehoppers. But this kind injects the bacteria when they eat liquid from a palm's leaves. Any palm cixiid that later feeds from the tree will pick up the infection and pass the bacteria to more palms.

Once inside a palm, the bacteria moves to the base of the tree, reproducing again and again until they block its circulatory system. The blockage makes it impossible for palm tree cells to get the nutrients and sugars they need to survive.

As an infected tree dies, its leaves change from green to a brownish or bronze color within about six months. The disease does not infect humans or animals.

Genetic testing shows lethal bronzing likely came from Mexico's Yucatan area. Bahder believes Hurricane Wilma in 2005 or a storm with a similar path carried infected treehoppers across the Gulf of Mexico to Tampa. Those insects infected area palms, which infected native treehoppers. The disease spread when winds blew infected insects to new areas or they caught rides on vehicles.

To stop the spread, Florida's agriculture department continuously inspects palm growers and documents those growers found to be free of the disease. If inspectors discover infected trees, the trees are destroyed and the grower's remaining trees are quarantined for at least six weeks.

Eric Muecke is responsible for Tampa's forestry programs. He said the city has had success containing the disease by keeping its palms healthy. Officials have surrounded more susceptible kinds of palms with trees that bacteria-spreading insects do not normally attack.

Brent Gaffney, a Gainesville landscaper, said Bahder's research is the state's best hope for containing the disease. But that is only if he gets enough financial support, noted Gaffney. Studies on whether large amounts of antibiotic drugs can save trees shortly after they have been infected are ongoing.

After infected trees are removed, nearby palms need preventative antibiotic injections to stop the spread. Each injection costs $50 and loses its effectiveness after three months. Bahder said that makes injections before the disease is present too costly for most homeowners, businesses and local governments.

Terry Spencer wrote this story for The Associated Press. Pete Musto adapted it for VOA Learning English. George Grow was the editor.

We want to hear from you. What kinds of environmental concerns do people in your country have? Write to us in the Comments Section or on 51VOA.COM.

citrus – n. a juicy fruit, such as an orange, grapefruit, or lemon, that has a thick skin and that comes from a tree or shrub that grows in warm areas

leafed – adj. having a specified kind or number of the flat and typically green parts of a plant that grow from a stem or twig

susceptible – adj. easily affected, influenced, or harmed by something

winged – adj. having parts on one's body that are used for flying or gliding

circulatory – n. of or relating to the movement of blood or other fluids through the body

quarantine(d) – v. to keep a person, plant, or animal away from others to prevent a disease from spreading

landscaper – n. a person whose job is to make changes to improve the appearance of an area of land

antibiotic – n. a drug that is used to kill harmful bacteria and to cure infections