Florida Universities Aim for Academics after Years of Sports Fame

Update Required To play the media you will need to either update your browser to a recent version or update your Flash plugin.
By Dan Friedell
05 February 2022

It was not a surprise to see the two schools in the final game because they were among the best in the nation. What is surprising, however, is that two other famous football teams from the neighboring state of Florida were so far from the best.

The University of Florida is in the city of Gainesville and Florida State University is in Tallahassee. Both are in the northern part of the state, close to Georgia and Alabama. 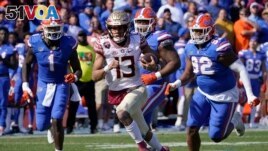 The Florida State quarterback is chased by players from Florida in the last game of the regular season for each team. Neither team won more games than it lost last year. (AP Photo/John Raoux)

The teams lost more times than they won. That is different from the recent past, when they were among the best in the nation. The last year both schools had a good year was 2016. That is about the same time Florida and Florida State started getting national attention for their academic programs.

The two schools are now seen as top choices for students in the southeastern United States.

U.S. News and World Report recently rated Florida fifth and Florida State 19th among public universities. In the 1990s and early 2000s, Florida, also known as UF, was rated about 50th among all U.S. universities. The school is now listed at 28th.

Other publications, including Forbes and the Wall Street Journal, also gave the schools high ratings on their lists.

How did the schools raise the academic bar?

Chris Chouinard is one person who knows about the academic programs at the University of Florida. He completed his advanced degree in chemistry there in 2016. He is now a professor at Florida Institute of Technology.

Chouinard said when he was younger, he had a different idea about the big Florida schools.

"I grew up thinking of a place like the University of Florida as a school that's really good at football and probably really good at partying but not necessarily the best in terms of academics. Well, come to find out that that's not the truth."

In 2020, the university announced a partnership with technology company NVIDIA to create an artificial intelligence and machine learning center. One of the founders of NVIDIA is Chris Malachowsky, a graduate of the University of Florida.

Chouinard said the university's push to be a leader in machine learning will put it in a leadership position for science and technology education.

Ayobami Edun, a Nigerian, is working on an advanced degree in electrical engineering at the University of Florida.

He said he heard about the schools in Florida because his Nigerian university had a relationship with Florida A&M University, another college in Tallahassee. Edun said he chose Florida because "I found out UF was the best in Florida."

"There's a very intense level of research at UF," he said. "And whether you're going to go into academia or industry, the classes prepare you."

At Florida State, former President John Thrasher started an effort to raise $1 billion for the university when he took the job in 2015. Part of the money went toward hiring more professors and helping students pay for college costs.

The new president, Richard McCullough, came from Harvard and Carnegie Mellon University in Pittsburgh where he led programs in information science and biology. His arrival shows the university will continue to support strong academic programs.

The school also centers its effort on keeping students and helping them graduate. Stephen McDowell is a leader in the university's college of communications. He said, "FSU has gotten recognition for the four-year graduation rate. That's good for the students (who start their careers sooner) and it also gets attention in the national rankings."

Why have the football teams struggled?

Between 1993 and 2013, Florida and Florida State combined to have the best college football team six times. But now, the schools are struggling in football, the most popular college sport in the U.S.

David Hale writes about college football for the sports publication ESPN. He said when a school can select more top students, it makes it harder for people who are great athletes but not strong students to get into the school. Hale said university leaders have a difficult choice.

"Are they more concerned with investing in academics and getting your U.S. News and World Report rankings higher or are they more invested in making sure athletics is successful and you're packing an 80,000-person stadium every Saturday and you're winning championships?"

Hale said when investment in academics produces better results than money spent on football, it becomes easier to invest in school programs than new sports buildings or a costly new coach.

Hale put it this way:

"You have more investment in your state. And you have higher-achieving workers... And you can attract bigger companies to come there and set up headquarters to create jobs because you have that skilled labor. And all of that stuff has very real, significant, long-term effects that are much more positive than a winning football season is."

Are you more interested in attending school in Florida after reading this story? How will you try to get there? Write to us in the Comments Section and visit 51VOA.COM.

graduate– n. a person who has finished his or her work at a school or university and earned a degree

stadium – n. a large place where sports competitions and other events such as concerts are held

coach – n. the leader of a sports team

attract – v. to cause someone to be interested in something