Is a Flying Car in Your Future?

Update Required To play the media you will need to either update your browser to a recent version or update your Flash plugin.
By Carolyn Nicander Mohr
03 May, 2017


Two weeks ago, we reported about developments with electric planes and flying cars. That technology could bring change to commercial and personal travel.

Sooner than you think, flying cars may appear in the skies. Imagine never having to worry about traffic, stoplights, or road construction. A flying car could get somewhere much faster than one traveling by road.

On the other hand, imagine having to avoid drones and other flying cars. Also, what if your battery dies when you are in the air? And, how will you know where to land?

The car is electric-powered and moved by eight rotor blades. Kitty Hawk wants people to be able to buy its flying car by the end of 2017.

According to the Kitty Hawk website, the car will be able to travel at speeds up to 40 kilometers an hour. It says under US aviation law such a machine "does not require registration or a pilot's license and may be flown in uncongested areas for recreational purposes." As of now, the car can only be flown over fresh water.

Kitty Hawk is making a list of people interested in buying the flying car. They must pay a deposit of $100. Those who get their names on the list early will receive $2000 off the final cost of the car. However, Kitty Hawk has not yet announced the price.

Kitty Hawk expects its first flying cars will go on sale by the end of this year.

At a conference last week, Uber announced plans for flying taxis to begin carrying passengers. The company expects to launch flying fleets in Dallas-Ft. Worth, Texas, US and Dubai in the United Arab Emirates by 2020.

Unlike the Kitty Hawk company, Uber does not plan to build its flying cars. Instead, it will use the resources of partner companies.

Like the Kitty Hawk car, Uber flying taxis will use electric power.

Uber says its flying taxis could travel up to 241 kilometers an hour. The company said that could reduce the travel time between San Francisco and San Jose, California from 2 hours on the road to 15 minutes in the air. 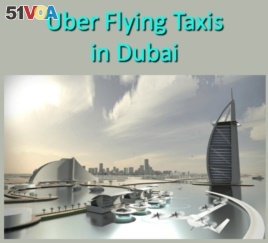 Riders could use the Uber app to book a flying taxi to take them to their destinations. The company has not yet said how costly air taxi travel would be compared to road taxi travel.

construction - n. the act or process of building something (such as a house or road)

rotor blade - n. a part of a machine that turns around a central point

uncongested - adj. not full or crowded with something (such as vehicles or people)

deposit - n. money that you give someone when you agree to buy something (such as a house or car)

fleet - n. a group of ships or vehicles that move or work together or that are controlled or owned by one company

destination - n. a place to which a person is going or something is being sent