Food Colors: Natural or Not?

Update Required To play the media you will need to either update your browser to a recent version or update your Flash plugin.
By Jonathan Evans
21 December, 2018


The color of food can send important messages about its quality.

Now, many food companies, including McDonald's and Kellogg's, say they will stop adding artificial colors to their products.

McDonald's announced in September that it had removed artificial colors from many of its hamburgers. Kellogg's has promised to remove them from its cereals by the end of this year.

What people accept as a normal color for food can change from place to place and over time. Until the 1980s, Americans expected pistachio nuts to be red. Pistachios were mostly imported from places where the nuts were dyed to cover spots.

Now, most pistachios sold in the United States are grown in the U.S. and have natural-colored shells. 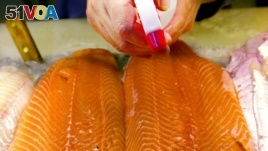 But it is not just processed and boxed foods that create illusions with color.

Elizabeth Chubbuck, of Murray's Cheese in New York, said adding color comes from the time when cheesemakers in England took the butterfat from milk to make butter. The leftover milk was whiter. So, she said, cheesemakers added substances to recreate butterfat's golden color.

Another cheese that sometimes gets color added is mozzarella.

Sara Burnett is director of food policy at Panera Bread. She said mozzarella sometimes gets its bright white color from titanium dioxide, a common substance taken from nature.

Cathy Strange buys international cheeses for the food seller Whole Foods. She said the whitening is done because most mozzarella made in the U.S comes from cow's milk, which can have a yellow color.

She said in Italy, mozzarella is sometimes made with milk from water buffalo. The milk is whiter because the animal cannot digest beta carotene, an orange nutrient in many fruits and vegetables.

Many cooks think darker egg yolks are fresher or healthier. But the color may be the result of marigold petals, alfalfa or coloring products in food for chickens.

Elizabeth Bobeck is a professor at Iowa State University. She says that yolk color is mainly caused by the carotenoids that chickens eat. Carotenoids are a natural coloring in plants. "It's easy to change yolk colors" by simply changing what chickens eat, she said.

Bobeck added that darker yolks are not necessarily healthier. This belief may come from the idea that yolks are darker when chickens are fed fresh plants.

In salmon, a bright pink color is a sign of freshness to those buying the fish. Experts say this is why farmed salmon may have been fed food containing a man-made substance to make the flesh pinker.

The Food and Drug Administration notes that manufacturers have to declare on labeling if non-natural colors were used for salmon. For example, farmed salmon at Costco Wholesale stores is labeled "color added through feed."

Candice Choi reported this story for the Associated Press. Jonathan Evans adapted it for Learning English. Mario Ritter Jr. was the editor.

artificial- adj. not natural or real; made, produced, or done to seem like something natural

dye –n. a substance used for changing the color of something such as hair or cloth usually permanently

digest – v. to change food that you have eaten by a biological process into simpler forms that can be used by the body

yolk – n. the yellow part in the center of an egg

labeling –n. a word or phrase that describes or identifies something or someone