Food Containers Getting Smaller, But Prices Are Rising

Update Required To play the media you will need to either update your browser to a recent version or update your Flash plugin.
By Dan Friedell
11 June 2022


In the United States, India, Britain and Japan, people are starting to see smaller containers and higher prices for food.

Economic experts say the changes in package sizes are a result of inflation. They call it "shrinkflation." 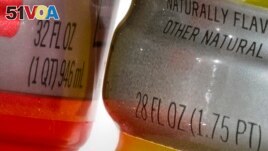 In some cases, people who buy these products are getting less for the same price. Some are seeing higher prices for smaller packages. Experts say the move by food companies is not new, but it is common in times of inflation.

Around the world, people paid on average seven percent more for goods in May than they did the year before. A company that researches prices, S&P Global, said people should expect the inflation rate to stay the same at least until September.

Edgar Dworsky is a former lawyer for the American state of Massachusetts. He runs a website called Consumer World. He noted that price increases and smaller packaging "comes in waves." He added, "We happen to be in a tidal wave at the moment."

Many companies that make these goods create smaller packages but also change the words on them to make them seem new or better, Dworsky said.

One kind of corn snack made by PepsiCo is called Fritos. They recently had a "party size" bag that contained about 510 grams. New packages are still called "party size," but now they only have 439 grams. PepsiCo did not answer questions about the new size when asked by the Associated Press. But the company did say the bottles for a drink called Gatorade were made smaller so people could hold them more easily, not because of inflation.

In India, Dabur India has been open about its changes. Byas Anand is head of communications for the company. He called the price increases and size decreases "down-switching."

People around the world have been noticing "shrinkflation." They have taken photos and shown examples of it on social media.

Many people say they are changing the way they buy food. Alex Aspacher in the American state of Ohio is saving money by buying larger amounts of cheese and cutting it himself instead of buying cut cheese.

He said he has been surprised by how quickly the changes have happened.

"I was prepared for it to a degree," he said, but "there hasn't been a limit to it so far."

Experts say prices may go down, but it is not likely packages will get larger.

In some cases, experts say, costs for food manufacturers are going up and they need to pass that on to buyers. But some companies might just be seeking higher profits.

Hitendra Chaturvedi is a business professor at Arizona State University.

He said he knows some companies are having trouble finding workers and paying higher costs. But he noted that PepsiCo's profits rose 128 percent in the first three months of 2022.

"I'm not saying they're profiteering, but it smells like it," he said.

Profiteering means selling things at very high prices at a time when they are hard to find.

Chaturvedi questioned: "Are we using supply constraints as a weapon to make more money?"

package– n. a box, bag or other container for food or other products

snack – adj. a small amount of food eaten between meals

sheet – n. a piece of paper or cloth

tidal wave– n. a very large amount of something

consumer –n. a person who pays for goods or services

to a degree– phrase to a certain level

constraint– n. something that restricts or limits