Update Required To play the media you will need to either update your browser to a recent version or update your Flash plugin.
By Dan Friedell
09 December, 2016


Would your pizza have a different taste if it were prepared by a robot?

That is the question people are asking as some American businesses test food-preparation robots.

A start-up company in California, called Zume, is testing machines that make pizza.

The robot takes and shapes dough to create the base of the pizza. It then adds tomato sauce, cheese, meat or other toppings. Next, the robot places the uncooked pizza into a hot oven. A few minutes later, the pizza is ready.

The pizza comes out the same each time. Zume says the robots work quickly and do not get sick. The robots do not get paid either.

Julia Collins is the company's founder and chief executive officer (CEO). Her business can spend money on better food products because it does not have to pay the robots. 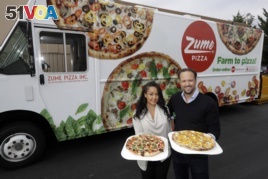 "We spend less money on repetitive labor," she says.

The important question for the company's success is: How does the pizza taste?

Charity Suzuki has bought the robot-made pizza. She likes its taste.

"It's delicious. It's always hot and fresh when it comes. I mean it's great that they're making it, but I can't tell the difference that it's made by a robot versus a human."

Zume said it is also testing another idea: a truck equipped with over 50 ovens. The truck will arrive at your home just as the pizza comes out of the hot oven. That makes for a fresher, hotter pizza than usual.

Other food preparation businesses are experimenting with robots.

A company called Bistrobot uses robots to make sandwiches. Its first machine is in a small store just south of San Francisco.

Right now, the machine only makes sandwiches with ingredients like peanut butter, jelly, Nutella and a spicy chili sauce. Each sandwich costs just $2.

Bistrobot's founder and CEO, Jay Repperts said the robot works faster and costs less than restaurant workers. It is also fun to watch.

"It's just this really fun experience to share with people," he said.

The companies say they are developing robots so people can get higher quality food faster. But what about the jobs the robots are taking from humans?

Ken Goldberg is a professor at the University of California in Berkeley. He also directs the school's automation laboratory. Goldberg said researchers have been working with robots for 50 years. He said that, while there has been progress, the jobs are not going to disappear right away.

"I want to reassure restaurant workers that the skills that they have are still going to be of value," Goldberg said.

Alex Garden is the chairman of Zume. He thinks there will be more interesting work for humans to do when the robots start performing some of the smaller jobs.

"We're going to eliminate boring, repetitive, dangerous jobs and we're going to free up people to do things that are higher value. There's going to be amazing new ways of working that don't exist yet that are going to be created."

Faiza Elmasry wrote this story for VOANews Dan Friedell adapted her report for Learning English. George Grow was the editor.

Will you order pizza from a robot someday soon? We want to know. Write to us in the Comments Section or on 51VOA.COM.

ingredient – n. something that is part of any combination or mixture

automation – n. the practice of using machines, computers, etc., instead of people to do work