Foot and Mouth Disease in Indonesia Could Affect Eid Festival

Update Required To play the media you will need to either update your browser to a recent version or update your Flash plugin.
By Bryan Lynn
09 July 2022


An outbreak of foot and mouth disease in Indonesia is threatening to disrupt the country's Eid al-Adha festival.

The festival happens during the Muslim holiday of Eid al-Adha. It celebrates the Prophet Abraham and his willingness to sacrifice his son. Muslims often mark the holiday by killing sheep, cattle or goats. Some of the animal meat is given to the poor.

Foot and mouth disease, which sickens animals, is a big threat to agriculture and food producers. 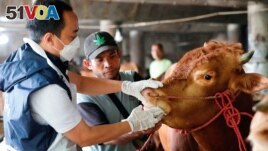 A Marine and Agricultural Food Security officer inspects a cow at a cattle shop to prevent the spread of foot and mouth disease in Tanjung Priok, North Jakarta, Indonesia, June 24, 2022. (REUTERS/Ajeng Dinar Ulfiana)

This year, the Eid al-Adha holiday falls on July 9. But, animal traders have reported lower sales this year because of the presence of foot and mouth disease.

The disease can spread quickly among animals including cattle, sheep, goats and pigs. While it can be deadly for animals, foot and mouth is not generally considered a threat to human health.

"This year is a year of loss for us," said Jamal Lulay, a trader in West Java. He told Reuters news agency he had only sold 50 cows this year. "Before COVID, we could sell up to 330 cows, and during COVID it was around 170... This year sales have dropped drastically."

Indonesia launched a nationwide animal vaccination program in an attempt to limit the outbreak, which began in May.

More than 317,000 animals have been infected in 21 Indonesian provinces. Government records show that more than 3,400 animals had been killed in an effort to contain disease spread.

Muhammad Husein al Bana is a livestock trader in Jakarta. He told Reuters, "People's enthusiasm for sacrifice has not been diminished, but they are more worried about the health (of the animals)."

Until the last outbreak, Indonesia had been free of foot and mouth disease since 1986.

Iskandar Saputra is a Jakarta buyer who said he is still willing to take the risk. "Ultimately it is the consumer's decision," he said. But he added, "I think the cows sold here are safe and healthy."

disrupt – v. to interfere with a normal activity

drastic – adj. extreme or severe in effect or action

enthusiasm – n. strong excitement about something

diminish – v. to become or cause something to become less in size, importance or some other quality

ultimately – adv. at the end of a process, period of time or at something's most basic level