Update Required To play the media you will need to either update your browser to a recent version or update your Flash plugin.
By Gregory Stachel
13 December 2021

The findings were published on December 9 in "Scientific Reports," which covers natural sciences. The findings announced the existence of sets of fossilized dinosaur footprints that prove the dinosaur could move quickly. 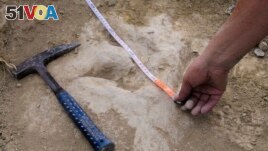 In this October 2020 photo provided by Alberto Labrador, a researcher measures a 120 million year-old fossilized dinosaur footprint the in the La Rioja region in northern Spain, while doing research about dinosaur running speeds. (Alberto Labrador via AP)

These footprints join other sets found in Utah and Texas. One of the sets there shows dinosaurs running at speeds over 48 kph. The Spanish footprints showed speeds of nearly 45 kph.

To figure out the running speed, scientists measured the length of the footprints and then considered the height of the place where the dinosaur's legs meet the body, or the hip. They also needed to consider the distance between one footprint and another on the same foot.

All the known sets of prints that show speed come from a family of dinosaurs called theropods. These carnivorous, or meat-eating, dinosaurs stood on two legs and could not fly. They are like the famed velociraptor, a dinosaur seen in many famous movies.

The researchers estimated that the animal that created the most recent set of footprints was probably 1.5 to 2 meters tall and 4 to 5 meters long from mouth to tail.

Scientists think there may be faster dinosaurs, but these footprints have been easier to find. The footprints are known as tracks when there are one or more long sets.

"Behavior is something very difficult to study in dinosaurs," said lead writer Pablo Navarro-Lorbés of the University of La Rioja. "These kind of findings are very important, I think, for improving that kind of knowledge."

These are "clearly active, agile animals," said Smithsonian paleontologist Hans Sues, who was not part of the study.

Emma H. Tobin reported this story for The Associated Press. Gregory Stachel adapted it for VOA Learning English. Susan Shand was the editor.

dinosaur – n. one of many reptiles that lived on Earth millions of years ago

tail – n. the part of an animal's body that extends from the animal's back end

paleontology – n. the science that deals with the fossils of animals and plants that lived very long ago especially in the time of dinosaurs