For All Book Lovers: Chapter 2

Update Required To play the media you will need to either update your browser to a recent version or update your Flash plugin.
By Anna Matteo
04 June, 2016

The goal of this show is to help you learn words and expressions in American English and also when to use them.

Today, we continue talking about the word "book."

Books are so common that it is easy to take them for granted, or fail to appreciate them. But "book" is a very useful word and is common to many expressions and idioms.

Let's begin with "book" used as a verb.

"To book" is a slang expression. Some experts say its earliest use was the 1970s. It means to leave -- often quickly. So, if someone says, "Can't talk now. I gotta (got to) book!" it means they need to hurry to get somewhere.

"Book" is also a very useful verb for traveling. For example, you "book" an airplane flight. That means you pay for a seat on a flight. You can also book a room at a hotel or a table at a restaurant.

Several online dictionaries say this usage of "book" began in 1841. Of course, at that time people were not booking plane tickets but railway tickets.

You can also book a musician or performer. That means to hire someone, usually for a special, one-time project. Some experts say this usage began in 1872.

People who are employed to book performers are sometimes called "bookers." You do not want to confuse them with "bookies."

A bookie is a person who takes bets from gamblers. This is often an illegal activity. Another illegal activity involving books is called cooking the books. This may sound like making food, but it is not.

Bookkeepers record the financial actions of businesses. They cook the books when they add false information. For example, people might lie about earnings so they pay less in taxes. They are cooking the books on their income.

Can you guess what the police sometimes do to illegal bookies and those who get caught cooking the books? They "book" them! In this case, "book" means to officially charge someone with a crime.

"Book ‘em, Danno!" is an iconic phrase from a popular cop show that ran in the U.S. from 1968 to 1980. Producers have brought "Hawaii Five-O" back to life. They even use popular phrase, "Book ‘em, Danno!" as a nod to the original show.

And, that brings us to some "book" idioms.

Let's say the booked bookie goes to trial. He hopes for a light punishment. But, instead, the judge throws the book at him. The judge gives him the most serious punishment possible.

However, the judge must still do things by the book. She must honor the rules of the legal system. People who go by the book follow the rules. 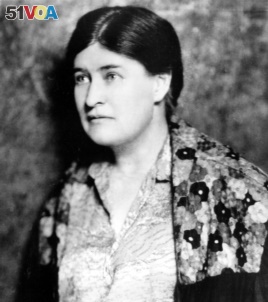 Willa Cather, American author and 1923 Pulitzer Prize winner, is seen in this photo from November 1937.

American writer Willa Cather used the expression "open book" in her novel "My Antonia." She describes a Christmas morning in which a poor neighbor visits a family.

"We persuaded our guest to stay for supper with us. He needed little urging. As we sat down to the table, it occurred to me that he liked to look at us, and that our faces were open books to him. When his deep-seeing eyes rested on me, I felt as if he were looking far ahead into the future for me, down the road I would have to travel."

Ms. Cather wrote many books. But you don't have to write a book for people to say you've written a book. Let me explain. Saying that someone has written the book on something means they know a lot about a subject. They are an expert. For example, a friend of mine in college, wrote the book on pulling all-nighters. She was an expert at cramming a semester's worth of work into just a few nights.

Now, let's hear some of these expressions in a dialogue.

"What are you doing?"

"Trying to fix my car. But I have tried every trick in the book and it just won't start!"

"You should ask Elizabeth from apartment 3B for help."

"You mean young, beautiful Elizabeth? Why would I ask her for help fixing my car?"

"Because she wrote the book on fixing cars. Her grandfather, father and four brothers are all mechanics! She's been fixing cars since she was 15 years old!"

"Wow, I guess I shouldn't judge a book by its cover."

"No, you shouldn't. Just because Elizabeth is young and beautiful you thought she could not fix a car. She's also a great D.J. I just booked her for a party I'm planning."

"Really. That's cool. You know, I may have pre-judged Elizabeth. But I'm sure you have done the same. For example, what do you think about the guy who lives in apartment 4C?"

"The quiet accountant? He never talks about himself. So I wouldn't call him an open book. But he's really nice and seems trustworthy."

"What would you say if I told you he got busted for cooking the books on a big investment scam?"

"Yes, and it's not the first time he has been booked for this type of crime. So, the judge threw the book at him! He'll be prison for at least seven years!"

"Wow, you're right! You really can't judge a book by its cover."

"Hey, your car started! You don't need Elizabeth after all."

"Well, I'm still going to ask her for help and then ask her out to dinner."

"That is the oldest trick in the book. And like your old car, that old trick will most likely backfire.

Um, is your car supposed to smoke like that?"

And it's time to close this chapter of Words and Their Stories. Join us again next week as we explore the origin and usage of common American English.

Can't you see, you misjudged me.

I may look like a farmer but I'm a lover!

Can't judge a book by looking at the cover...

Are you an open book? Do you live by the book? Practice with some of the idioms found in this story on 51VOA.COM!

Anna Matteo wrote this for VOA Learning English. Caty Weaver was the editor. Bo Diddley sings "You Can't Judge a Book By The Cover" at the end of this story.

for granted – idiomatic phrase : to accept or assume without question: one takes certain amenities for granted : to fail to appreciate the value, merit, etc, of (a person)

nod – n. something done to show that someone or something has been chosen, approved, etc.

cram – v. to prepare hastily for an examination <cram the students for the test>

to judge a book by its cover – saying : said to show that you cannot know what something or someone is like by looking only at that person or thing's appearance (featured in Words and Their Stories - For All Book Lovers: Chapter 1)

D.J. – n. abbreviation for disc jockey : a person who plays popular recorded music on the radio or at a party or nightclub

backfire – v. of an engine or vehicle : to make a loud sound when fuel is not burned properly; slang : to have the opposite result of what was desired or expected