Many Internships Offer a Direct Path to Jobs

Update Required To play the media you will need to either update your browser to a recent version or update your Flash plugin.
By VOA
30 May, 2017


A survey recently found that Facebook pays its interns $8,000 a month, more than any other American company.

The survey was carried out by the website Glassdoor, on which people can post information about job experiences and pay.

In second place was Microsoft, which pays its interns $7,100 a month. Oil company ExxonMobil came in third at $6,500. It was one of only a few non-technology companies to make the top 25 list. Amazon and Apple interns earn $6,400 a month, while Google pays $6,000, according to the survey.

These internships pay much more than the average American earns. The government estimated the average U.S. pay in 2015 was about $4,000 a month.

One thing that has changed over the years is that many companies now use the same methods for recruiting interns as for full-time employees.

Ed Koc is the Director of Research, Public Policy and Legislative Affairs for the National Association of Colleges and Employers (NACE). He says companies now come directly to colleges hoping to find interns who will later become permanent employees.

"They're very selective in terms of who they choose to bring on board. Particularly because they want to be able to convert that student into a full-time hire once that internship is over."

This means that students should be preparing for internships in the same ways they would for a real career job.

NACE connects U.S. college career service centers and conducts surveys on the job market for graduates. Koc said at companies the organization works with, about 52 percent of interns end up getting full-time jobs.

He said research also suggests that interns working in paid internships get hired faster than those who are not paid.

"The primary reason for that is that the employers that provided paid internships actually were the ones hiring the students. They were looking at them in a probationary fashion." 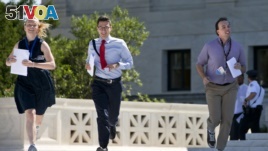 In this file photo, new interns run with a decision across the plaza of the U.S. Supreme Court in Washington, June 29, 2015. (Photo by Jacquelyn Martin/AP)

Another NACE study found that unpaid internships led to decreased levels of job satisfaction. They also resulted in less development of skills than paid internships. But unpaid interns gained a better understanding of their career field and some increased their academic performance, the research showed.

William Goodloe is President and Chief Executive Officer of the not-for-profit Sponsors for Educational Opportunity (SEO). He says many companies have found that an internship is a much more valuable recruiting tool than a job interview.

"What they find is that interviews are not as reliable as they would like. But if you get to work with someone - observe them for 10 weeks - then you have a much better sense of if you want to ask them back full-time after they graduate from college."

The SEO Career program recruits and trains college students and places them in paid internships. The organization works with "underserved and/or underrepresented" students, including African Americans, Hispanics and Native Americans.

SEO reports that 80 percent of its interns end up getting full-time job offers. Goodloe noted that one problem with unpaid internships is that they limit the candidates to only those with enough money to support themselves.

Besides internships, some schools offer students another kind of work experience, called co-operative (co-op) education. Co-op students balance classroom study with full-time employment throughout the school year. The students are paid by companies while working during extended breaks from academic studies.

The University of Cincinnati (UC), in the Midwestern state of Ohio, started the first American co-op program in 1906. Today, it has partnerships with more than 1,800 companies. Depending on the area of study, most co-op students at UC earn between $12 to $27 per hour. This would be equal to yearly pay of $25,000 to $56,000.

Some UC programs, including engineering, design and architecture, require students to complete co-op programs. In others, students can choose between a co-op or internship.

Kettil Cedercreutz is the head of UC's Division of Experience-based Learning and Career Education. As with internships, he says companies now use co-ops as a major recruiting tool.

"Right now we have an average of 98 percent placement rate in co-op jobs. Then what happens when they graduate, they have 20 months of practical experience in their major under their belt."

Cedercreutz said co-ops can also be good for students' academic performance and help them reach their graduation goals.

"In a co-op program they actually do graduate on time. To a very large extent because they learn something in the classroom and then they go out in industry and get to apply it - and they get to sort of digest it."

UC also operates international co-op programs in which students study languages and then go to work at companies in Japan, Germany and Singapore.

Bryan Lynn reported on this story for VOA Learning English. Hai Do was the editor.

We want to hear from you. Tell us about your own experiences with internships. Write to us in the Comments section, and visit 51VOA.COM.

intern – n. student or recent graduate who works at a company to get experience

recruit – v. find suitable people to work for a company

convert – v. change from one system or position to another

hire - n. someone hired by a company for a job

probationary – adj. period of time in which a person is tested to see if they are able to perform a job

reliable – adj. able to be trusted to provide what is needed