For Top US Virus Experts, Faith and Science Work Together

Update Required To play the media you will need to either update your browser to a recent version or update your Flash plugin.
By Susan Shand
03 June 2020


The relationship between faith and science has faced some questions during the spread of the coronavirus. But for some leading American scientists, the two have a partnership.

The director of the National Institutes of Health (NIH), Francis Collins, started an organization that looks at "the harmony between science and biblical faith."

Anthony Fauci is NIH's senior infectious disease specialist. He has said he is not active in organized religion. However, Fauci says his involvement in Catholic schools run by Jesuits helped him form the values that drive his public service today. 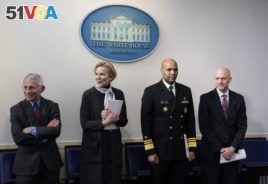 Robert Redfield is the director of the U.S. Centers for Disease Control and Prevention. He says his personal faith and public health work support each other.

"One of the greatest things about faith is, you can approach life with a sense of hope -- no matter what the challenges you're dealing with -- that there's a path forward," Redfield told The Associated Press.

The influence of faith on these top coronavirus fighters demonstrates its complex relationship with science. However, the personal religious beliefs of some scientific leaders have clearly guided them through the U.S. fight against coronavirus.

Redfield said his faith has helped him see the "greater good" in times of tragedy or crisis. For example, he noted that his faith had provided strength after the death of his son and during his involvement in the response to Haiti's 2010 earthquake. Redfield says that for him, faith and science are not in conflict.

A longtime friend of Redfield, William Blattner, told the AP that Redfield's faith is also evident in his public persona. Redfield was not seen as often as Fauci at televised White House briefings on the coronavirus crises in recent months.

Blattner said his friend is not a seeker of such public attention."You don't see him jumping up to the microphone. You see him speaking as he's required."

He added that Redfield sees people of faith as "not holier than anybody – we're just who we are." Blattner co-founded the University of Maryland's Institute of Human Virology with Redfield and another well-known AIDS researcher in the 1990s.

Collins and Fauci were government scientists before Donald Trump became president. Redfield was asked by Trump to join the government. Collins has spoken openly about his view that religious belief and science can be in agreement.

In 2006, Collins wrote a book about how he changed from a young man with no faith to a man with a deep belief in God. Later, he started the BioLogos Foundation to help further discussion about religion's relationship to science.

"I see science as the most reliable way to study nature – and that includes this virus," Collins wrote in an email to the AP. "But science doesn't help me with deeper questions like why suffering exists, what we are supposed to learn from it, what is the meaning of life, and whether there is a loving God..." he added. To deal with those questions, Collins said, he depends "on what I have learned as a person of faith."

Fauci's faith has changed from his Catholic childhood to what he has described as a humanist belief system. The longtime chief of the National Institute of Allergy and Infectious Diseases said in 2015 that he wasn't involved with an organized religion. He said he was interested in "goodness to mankind and doing the best that you can."

approach – v. to get near or to undertake

persona – n. the image or personality that a person presents to other people

motivate – v. to give someone a reason for doing something

reliable – adj. able to be trusted to do or provide what is needed