Foreign Visitors Head to US as Travel Ban Ends

Update Required To play the media you will need to either update your browser to a recent version or update your Flash plugin.
By Bryan Lynn
08 November 2021


A United States travel ban on foreign visitors from many countries was lifted on Monday.

The action permitted many international travelers to take passenger flights to America for the first time since the COVID-19 health crisis began.

The administration of former President Donald Trump first placed COVID-19-related restrictions on air travelers from China in January 2020. These were later extended to 33 countries, including many in Europe. Americans have been permitted to travel to Europe for months. European governments had been pushing the U.S. to change its policies. 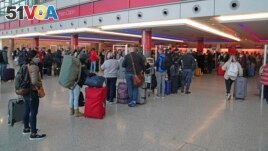 Passengers queue at London Heathrow Airport's T3 as the US reopens its borders to UK visitors in a significant boost to the travel sector, in London, Monday, Nov. 8, 2021. (Steve Parsons/PA via AP)

The U.S. had also restricted entry through land borders from Mexico and Canada to only "essential" travel. Beginning Monday, anyone can enter if they show proof that they have been vaccinated.

Acceptable vaccines are those approved for emergency use by the World Health Organization (WHO). These include injections from Pfizer, Moderna, Johnson & Johnson, AstraZeneca and China's Sinovac. Russia's Sputnik V vaccine has not been approved by the WHO and is not acceptable.

There will be exceptions to the vaccine requirement for people from countries where fewer than 10 percent of the population has been vaccinated. Travelers from those nations will need special permission from the U.S. government to enter.

Airline companies will be responsible for enforcing the vaccine requirements and could face government fines if they do not follow the rules.

Alice Keane told Reuters news agency she was finally getting to travel from London to Miami to see her sister. She said it was "really, really exciting."

"I was meant to go just before COVID happened, and obviously it's been delayed this long, so it's really exciting to finally be able to go," she said.

Virgin Atlantic chief Shai Weiss told Reuters that the British airline's planes were full. He said business was expected to remain strong in coming weeks into the holiday season.

Delta Airlines Chief Executive Ed Bastian warned travelers to expect long lines. But he promised the company would aim to reduce wait times and get things "sorted out."

Bindiya Patel spoke to Reuters at London's Heathrow Airport. "I think we might just start crying," she said. Patel explained that she was going to see her one-year-old nephew in New York for the first time.

Mexico's Ciudad Juarez is just across the border from El Paso, Texas. In that city, a line of about 20 people formed early Monday to enter the U.S., Reuters reported. Some members of the group had not seen family members on the other side since March 2020.

"We thought they were going to tell us again that they had decided not to open it," said Lorena Hernandez. She was reunited with her grown-up daughter in El Paso. "I said, if they don't reopen, I'm going to take a plane," she added.

negative – adj. in a medical test, negative means the person being tested does not have a disease

sort (something) out – v. (phrasal) to deal successfully with something, such as a problem or difficult situation