Update Required To play the media you will need to either update your browser to a recent version or update your Flash plugin.
By Hai Do
28 June 2022


A former White House assistant told a group of lawmakers that former U.S. President Donald Trump dismissed concerns that his supporters were armed on January 6, 2021.

She said that the former president also tried to take hold of the steering wheel of the presidential limousine from his security in an attempt to direct the vehicle to the Capitol.

Cassidy Hutchinson was an assistant to Trump's Chief of Staff Mark Meadows. She swore to tell the truth Tuesday before a group of lawmakers investigating the violent attack at the Capitol on January 6. 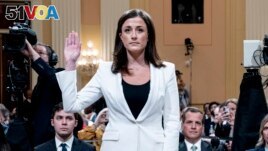 Cassidy Hutchinson, former aide to Trump White House chief of staff Mark Meadows, is sworn in to testify as the House select committee investigating the Jan. 6 attack on the U.S. Capitol holds a hearing at the Capitol in Washington, June 28, 2022. (AP Photo/Andrew Harnik, Pool)

Hutchinson said Trump directed workers to remove the metal-detecting magnetometers that could have slowed down his supporters that day.

She said that the former president said, "I don't...care that they have weapons. They're not here to hurt me. Take the...mags [magnetometers] away. Let my people in. They can march to the Capitol from here."

Hutchinson said she received an angry telephone call from House Minority Leader Kevin McCarthy. She said he had just heard the president say he was coming to the Capitol. "Don't come up here," McCarthy told her, before hanging up.

Hutchinson said the information about what happened inside the presidential car came from two men. They were Anthony Ornato, the White House Deputy Chief of Staff at the time, and Robert Engel who was responsible for Trump's security that day. CNN reported that both Ornato and Engel have testified secretly to the committee.

On January 6, 2021, Trump supporters attacked and occupied the Capitol building in Washington D.C. They reportedly aimed to stop members of Congress from counting electoral votes. The event was the final step in confirming Joe Biden as the winner of the 2020 presidential election. Four protestors and one police officer died as the result of the attack. More than 100 police officers were injured.

The former president reacted to Hutchinson's testimony on his Truth Social website. Trump said, "I hardly know who this person, Cassidy Hutchinson, is, other than I heard very negative things about her..." Trump added that he personally rejected her request to join his group at Mar-a-Lago after the presidency.

Sarah Matthews was an assistant press secretary for Trump at the White House. She wrote on Twitter, "Anyone downplaying Cassidy Hutchinson's role or her access in the West Wing either doesn't understand how the Trump WH worked or is attempting to discredit her because they're scared of how damning this testimony is."

The days before the attack

In the days before the attack, Hutchinson said that she was "scared, and nervous for what could happen" after speaking with Trump lawyer Rudy Giuliani, Meadows and others.

Meadows told Hutchinson that "things might get real, real bad on Jan. 6," she said. Giuliani told her it was going to be "a great day" and "we're going to the Capitol." But Pat Cipollone, a White House lawyer, had serious legal concerns about Trump marching to the Capitol. Hutchinson told lawmakers that Cipollone told her: "We're going to get charged with every crime imaginable."

Hutchinson said she was also involved in talks about requests from several Republican lawmakers for presidential pardons before of the January 6 event.

She described Meadows as unconcerned as Ornato told him that people at Trump's event had weapons. She told lawmakers that this included people wearing armor and carrying weapons.

Before her work as special assistant to former Trump chief of staff Mark Meadows, the 25-year-old Hutchinson worked for two lawmakers. They were House Republican leader Steve Scalise and Senator Ted Cruz, a Republican from Texas.

The House committee is made up of Democratic lawmakers. Two Republicans, including Liz Cheney, the vice-chair, were included by the Democratic majority in the House.

The committee has held five hearings so far. It has been seeking evidence mostly about whether Trump pressured federal agencies or state governments to interrupt the certification of Democrat Joe Biden's presidential election victory.

steering wheel –n. a control wheel in a vehicle that the driver uses to turn the vehicle

testimony –n. something that someone says especially in a court of law while formally promising to tell the truth

armor –n. special clothing that people wear to protect their bodies from weapons

interrupt –v. to cause something to stop happening for a time

certification –n. the act of making something official