Update Required To play the media you will need to either update your browser to a recent version or update your Flash plugin.
By VOA
09 May, 2015


Hundreds of people are enjoying freedom after their rescue from Boko Haram militants in northeastern Nigeria. The women, girls and young children are now trying to recover physically and emotionally after spending months in captivity.

The Nigerian military rescued the 275 women and children from the Sambisa forest. It is one of the last strongholds of the Nigerian extremist group Boko Haram. Those rescued live in what was once a school in a village near Yola, the capital of the northeastern state of Adamawa. Their families have been torn apart and their livelihoods destroyed. Now, they are trying to rebuild their lives.

Magdalene Matthew was kidnapped by Boko Haram last December. She says the fighters took her from town to town, often without food or water. 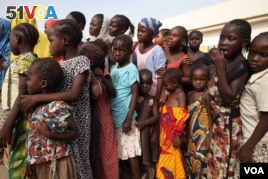 People rescued from the Sambisa forest line up to receive donated clothes in Malkohi, Nigeria, May 5, 2015. (Chris Stein)

One day, a military aircraft bombed her group. Some of the captives were killed. After some time, Boko Haram took her to the Sambisa forest.

She said, "We were there for a very long time, and Boko Haram was forcing us to get married and convert to Islam, and we refused," she said. "In the process, God sent a helper, which was the Nigerian military, and they rescued them and took them out of Sambisa."

Officials say some of the 275 people who arrived at the camp suffered from malnutrition and even gunshot wounds. Now, the sick and injured are getting treatment.

Many are suffering from trauma, the emotional pain from their time in captivity. Counselors have been speaking with the former captives. Their goal is to make them understand how weeks and months in captivity can affect one's mind. Henry Abews is one of the mental health experts.

Boko Haram has carried out a six-year battle to enforce its version of Sharia law in northeastern Nigeria. The group has attacked villages, including some in Adamawa state. Boko Haram's campaign has displaced more than one million people. Tens of thousands of those went to the area near Yola.

Haruna Hammam is the permanent secretary of Adamawa state's Emergency Management Agency. He says he expects more rescued people to arrive at the camp.

"They said we should expect more depending on the availability of space with us. So we hope that they continue to rescue, and we also are willing to receive, as they bring."

There may be more people arriving soon. Nigeria's military announced on Wednesday that it had rescued another 25 women and children from the Sambisa forest.

Chris Stein reported this story for VOA from Malkohi, Nigeria. Mario Ritter adapted it for Learning English. The editor was George Grow.

stronghold(s) – n. a protected place where members of an armed force can stay and can defend themselves

livelihood(s) – n. a way of earning money to live