Update Required To play the media you will need to either update your browser to a recent version or update your Flash plugin.
By Christopher Jones-Cruise
30 August, 2017


A former rebel group in Colombia is becoming a political party.

The Revolutionary Armed Forces of Colombia fought against the Colombian government for more than 50 years. It was the largest rebel movement in the country.

This week, it launched a political party at a conference in the capital, Bogota. The former rebels said they would work with other groups to overturn the country's traditional conservativism. 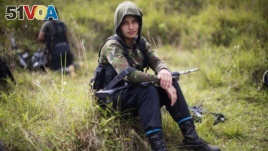 FILE - Juliana, a 20-year-old rebel fighter for the 36th Front of the Revolutionary Armed Forces of Colombia, or FARC, rests from a trek in the northwestern Andes of Colombia, in Antioquia state, Jan. 6, 2016.

The rebels signed a historic peace deal with the government last year. The agreements guarantee the former fighters 10 seats in Congress. The new party will get the same amount of financial support the government gives to Colombia's 13 other political parties. The government also agreed to give the former rebels $500,000 to launch a research group to help the party develop its political beliefs.

Rodrigo Londono was known as Timochenko when he fought for the Revolutionary Armed Forces of Colombia, also called the FARC. He recently told a group of former rebels they "are taking an extraordinary step in the history of the common people's struggle in Colombia." But he noted that the decision to sign the agreements doesn't mean we are rejecting in any way "our fundamental principles."

The group has said that it still believes in the political and economic ideas of Karl Marx. And it says it will seek support for its social justice policies from poor people, workers and middle-class Colombians who live in cities.

The group faces opposition from many who identify the rebels with kidnappings and terrorism. In August, an opinion study found that fewer than 10 percent of Colombians said they had complete trust in the rebels as a party. A large majority said they would never vote for a former guerrilla in congressional elections.

Adam Isacson works at the Washington Office on Latin America, a research group. He says the former rebels are "not going to be received very warmly in most of Colombia. Their human rights record hurt them. Their media image is terrible. Most Colombians quite simply aren't socialists or communists."

But Isaacson added, "All is not lost. A message of wanting to redistribute wealth and undo economic injustice could probably do quite well in a lot of poor areas of Colombia."

The group's entry into politics is strongly opposed by politicians like former President Alvaro Uribe. He has sharply criticized the peace agreement. And the Supreme Court is now considering whether a law naming the former rebels a political party is constitutional. Earlier, the court had ruled it was.

At a recent court hearing, former Peace Commissioner Camilo Gomez said "the fact that a war criminal could become president of Colombia makes no sense."

But many people support the peace deal. Ivan Cepeda of the Alternative Democratic Pole says bringing the rebels into the political process is the best way to guarantee a lasting peace.

"We have had to pay a very high cost in lives, in infrastructure that today we are saving with the end of the conflict," Cepeda said. "It's more an investment in the democracy of Colombia."

The FARC was formed in the early 1960s by guerrillas allied with Colombia's Communist Party. Over the next 53 years, at least 250,000 people were killed in fighting among the rebels, government forces and paramilitary groups. About 60,000 people are still listed as missing, and millions of people were displaced.

Four years of negotiations in Cuba between rebel leaders and the Colombian government ended with the signing of the peace agreements. The rebels agreed to give up their weapons and admit to their crimes in a special peace tribunal. Most of them will not be sent to jail. The rebels must also return any property they seized to victims of the conflict.

The agreement also deals with how to reduce the production of coca crops, from which the drug cocaine is made. The United States once named the FARC as one of the world's biggest traffickers of illegal drugs.

Colombian voters rejected the peace deal by a small number of votes. But the country's legislature later approved a different version, with minor changes.

Recently, the Colombian company Politmetrica asked Colombians whether they were hopeful about the peace process. The survey found that public optimism has dropped since the nationwide vote last October -- from 67 percent of those surveyed to just about 53 percent.

The Associated Press news agency reported this story from Bogota. Christopher Jones-Cruise adapted the report for Learning English. George Grow was the editor.

fundamental – adj. of or relating to the most important part of something

redistribute – v. to spread to other areas

paramilitary – adj. of or relating to an armed group or militia

tribunal – n. a court of justice