Update Required To play the media you will need to either update your browser to a recent version or update your Flash plugin.
By Mario Ritter Jr.
29 September 2021

The move means Kishida will likely become the country's next prime minister soon. The Liberal Democratic Party, or LDP, controls both houses in Japan's parliament.

The decision by current Prime Minister Yoshihide Suga to step down led to Wednesday's results.

None of the four main candidates gained a majority in the first vote, which also included Taro Kono, Sanae Takaichi and Seiko Noda. Kishida easily won the second ballot 257 to 170. In that vote, he faced only Kono, the official overseeing Japan's coronavirus vaccination effort. 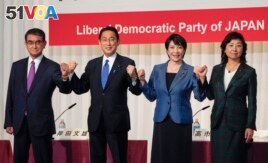 Candidates for the presidential election of the ruling Liberal Democratic Party pose prior to a joint news conference at the party's headquarters in Tokyo, Japan, Sept. 17, 2021. The candidates are, from left, Taro Kono, Fumio Kishida, Sanae Takaichi and Seiko Noda.

General elections are to take place no later than November 28. Some LDP officials said parliament is likely to be dismissed in October in preparation for elections in the first half of November.

A win for the establishment

It remains unclear how Kishida's leadership will affect the LDP's performance in upcoming elections. Kono was considered the more popular candidate. Suga became unpopular for his decision to hold the 2020 Olympic Games this year in Tokyo even though many Japanese protested the move.

Yukio Edano is the head of the Constitutional Democratic Party, the largest opposition party. He criticized the choice of Kishida. "The results showed that LDP does not and cannot change," he said.

Kishida is considered a moderate who seeks agreement but is less popular with the public than some other politicians.

In his victory speech, Kishida promised to deal with "national crises" including the COVID-19 pandemic, the struggling economy and the country's falling birthrate. He also said he would deal with "important issues related to Japan's future." One of those issues is "a free and open Indo-Pacific" that balances China's influence, he said.

Kishida has promised spending more than $270 billion dollars on projects to help the economy. During his candidacy, he said a new kind of capitalism was needed to ease the division between rich and poor. "We can't have strong growth if wealth is concentrated in the hands of a small group of people," he said.

In foreign policy, Kishida is unlikely to propose big changes. He has agreed with the need to improve Japan's defenses. This includes strengthening ties with allies like the United States and the QUAD, which also includes India and Australia. Keeping trade ties with China also remains important.

Three generations of the Kishida family have served as lawmakers. Kishida was first elected to office in 1993.

A supporter of nuclear disarmament, he welcomed former U.S. President Barack Obama during his 2016 visit to Hiroshima, where Kishida is from. The city is where the first atomic bomb was dropped.

Kishida served as foreign minister under former Prime Minister Shinzo Abe. In 2015, he helped negotiate an agreement with South Korea over Korean women who said they suffered sexual abuse by the Japanese during World War II. The issue continues to cause tensions between the two countries.

stability –n. the quality or state of something that is not easily changed or likely to change

concentrated –adj. something that is in a specific place and is mainly found in that place

option –n. a choice or possibility; something that can be chosen