Update Required To play the media you will need to either update your browser to a recent version or update your Flash plugin.
By Caty Weaver
24 April, 2018


Former United States President George Herbert Walker Bush is in a hospital in Houston, Texas. He is sick with sepsis, an infection of the blood.

A spokesman said Bush was admitted for medical treatment Sunday, the morning after the funeral of his wife, Barbara.

On Monday, spokesman Jim McGrath wrote on Twitter that the 93-year-old former president is "responding to treatments and appears to be recovering."

Barbara Bush was buried on Saturday. Mrs. Bush was 92 years old. She and her husband had been married 73 years — the longest presidential marriage in U.S. history.

Three other former presidents and their wives joined George H.W. Bush at the funeral. The three are their son, George W. Bush, Bill Clinton and Barack Obama. Melania Trump, wife of President Donald Trump, also was among the mourners. 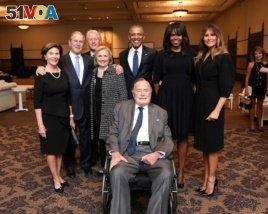 George H.W. Bush uses a wheelchair and an electric scooter to move around after he developed a form of Parkinson's disease. He has needed hospital treatment several times in recent years for breathing problems.

Monday night, McGrath would not provide details on Bush's condition. He said additional information would be provided as needed. He also said the 41st president was eager to get well so he can get to his summer home in Maine.

George H.W. Bush served as president from 1989 to 1993. Born June 12, 1924, in Milton, Massachusetts, he also served as a congressman, director of the Central Intelligence Agency and Ronald Reagan's vice president.

eager - adj. feeling a strong and impatient desire to do something

respond - v. to have a good or desired reaction to something

scooter - n. a small personal vehicle used to move about