Update Required To play the media you will need to either update your browser to a recent version or update your Flash plugin.
By VOA
11 June, 2014

George Herbert Walker Bush was born in the eastern state of Massachusetts on June 12, 1924.

During World War II, at the age of 18, George Bush delayed entering college and joined the Navy. He finished his training at the age of 19 and became the youngest Navy pilot in American history.

Mr. Bush was a brave pilot. He was awarded many medals for his service in the Pacific during the war.

In 1945, he married Barbara Pierce. They had six children. One of them, Pauline, died as a child. Their oldest son, George, was elected the 43rd President of the United States. Another son, John -- known as "Jeb" -- was elected governor of Florida. President George Bush raises his right hand as he is sworn into office as the 41st president of the U.S. (File photo)
In the 1950s, George Bush developed a successful oil business in Texas, and decided to enter politics. He became the Republican Party's candidate for U.S. Senate in 1964, but lost the election. In 1966, he was elected to the House of Representatives. He served four years in Congress.

During the 1970s, Mr. Bush held several major government jobs, including working as the U.S. Ambassador to the United Nations. He also served as America's representative to China and head of the Central Intelligence Agency.
(MUSIC)

In 1980, George Bush sought the Republican presidential nomination. He eventually lost to Ronald Reagan, but was Reagan's choice for vice-president. Together, they served two four-year terms in office.
In 1988, Mr. Bush was the Republican candidate for president. During the election campaign, he made some promises he would later regret.
"Read my lips. No new taxes!"

"And now we will move again for an America that is strong and resolute in the world, strong and big hearted at home and when I said, when I said, ‘I want a kinder, gentler nation,' I meant it, and I mean it."

Mr. Bush became president during a period of great change in the world. The Soviet Union was dying. The 40-year-long Cold War was ending peacefully. The Berlin Wall would soon fall. The wall had separated West and East Berlin since 1961.

In December of 1989, President Bush ordered thousands of troops into Panama to remove General Manuel Noriega from power. Noriega was later jailed on drug trafficking charges. 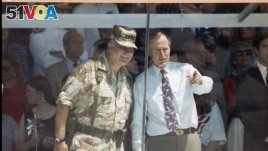 "The coalition will give Saddam Hussein until noon Saturday to do what he must do -- begin his immediate and unconditional withdrawal from Kuwait."

The war ended quickly after an air attack and a short ground invasion. Mr. Bush decided not to move troops toward Baghdad or to occupy any part of Iraq.

American University Professor Allan Lichtman is a presidential historian.
"Of course, we could defeat the Iraqi Army. Of course, we could push Saddam Hussein out of Kuwait. But what was difficult was getting the world behind us, including the Arab world, and that was the signal achievement of George H.W. Bush."

Although Mr. Bush enjoyed great popularity after U.S. and allied troops removed Iraqi troops from Kuwait, the victory was not enough to keep him in office. The American economy was worsening. And he did not keep his promise of "no new taxes." This angered many of his conservative supporters.

He lost in his attempt to be re-elected to Arkansas Governor Bill Clinton, a Democrat. After losing the election, Mr. Bush retired from politics.

He has not been seen often, although he did parachute out of an airplane on his 80th birthday. And he joined his former political opponent Bill Clinton to raise money for humanitarian causes.

He now spends much of his time with his family in Texas and at their summer home at Kennebunkport in the northeastern state of Maine.
Related Articles
go top