Update Required To play the media you will need to either update your browser to a recent version or update your Flash plugin.
By VOA
19 July, 2012

The world's two biggest economies and their trade ties are important to global economic progress. China accounts for nearly half of the world's economic growth. Last year, trade between the United States and China was worth more than five hundred billion dollars.

The two nations share many interests. But they also differ on many, including trade issues.

American and Chinese policy experts have worked to study and improve relations between the trading partners. Recently, former Treasury Secretary Henry Paulson spoke in Washington about his report on a possible new direction in US-China relations. Former National Security Advisor Steve Hadley joined the discussion. Both men served in the administration of President George W. Bush. The slowdown in China's economy was the first issue they discussed. Members of the Chinese news media also attended. 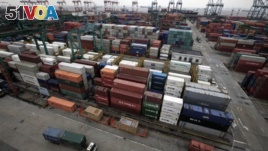 In this file photo, hundreds of shipping containers in Shanghai filled with products wait to be exported to the United States and other countries.
Chinese officials reported last week that the economy grew at a rate of seven and six tenths percent from April to June. That is China's slowest growth rate in more than three years.

The Chinese economy needs a high growth rate in order to provide jobs for its huge work force. The People's Bank of China cut its main interest rate twice in July to support lending and economic growth. Mister Paulson said he thinks government measures to control lending will work over the short term.

HENRY PAULSON: "And so I would be quite surprised if they don't grow somewhere between seven and a half or eight percent this year."

But there are important economic issues waiting in the future. Much of China's economic activity depends on investment by state-owned and foreign companies.

Mister Hadley said China's economy, its Gross Domestic Product, or GDP, depends on investment too much.

Consumer or personal spending accounts for about two thirds of the economy in the United States.

And that's the VOA Special English Economics Report. Join us next week for part two of our report on economic ties between the United States and China. For transcripts, MP3s and now PDFs of our programs for e-readers, go to 51voa.com. And follow us on Facebook, Twitter and iTunes at VOA Learning English. You can also find our captioned videos at the VOA Learning English channel on YouTube. I'm Mario Ritter.
Related Articles
go top