Update Required To play the media you will need to either update your browser to a recent version or update your Flash plugin.
By Mario Ritter
15 November, 2016

Christopher Hill formerly served as the U.S. ambassador to Iraq and Assistant Secretary of State for East Asian and Pacific Affairs.

The Six Party Talks involved North and South Korea, China, Japan, Russia and the United States. However, all six nations have not met on the nuclear issue since 2009.

Hill was in Seoul to speak at a South Korean government conference on the chances for peace and unification on the Korean Peninsula. He sought to signal a change in U.S. policy.

"So I think that North Korea needs to understand that there will be a new sheriff in town in Washington..."

With his statement, Hill noted the president-elect's willingness to take action against a possible North Korean threat. He also tried to reassure America's allies that the U.S. government will honor its security agreements in Asia.

Not all those who attended the conference were in agreement.

Gareth Evans formerly served as Australia's foreign minister. Evans said he is worried the American president-elect would act impulsively against an aggressive opponent. He also is concerned that such an action could start a wider conflict.

"Where is that going to take us, a preemptive military strike? I mean that is premised on the assumption that if the North Koreans have a nuclear weapon and have a missile delivery capability, the United States and everyone else is at real risk. But what on Earth is ever going to encourage the North Koreans to use such a missile in that situation?"

Evans said that, as a candidate, Trump had caused allies to question the U.S. commitment to defending them and securing peace in Asia. 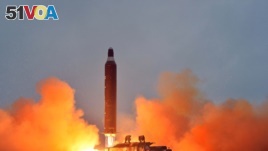 This launch in June of a medium-range missile by North Korea is one of many launches this year.

North Korea has expanded its nuclear development program this year. The North's government has tested two nuclear devices and many long- and medium-range missiles.

Experts say within five years, North Korea will be able to launch an intercontinental missile armed with a small nuclear warhead.

Hill also noted that moderate foreign policy specialists from the Republican Party are among those on Trump's national security transition team. He said they are placing importance on stability and continuity in North Korean policy.

During the election campaign, candidate Trump had criticized some U.S. allies for not providing enough support for defense efforts in Asia.

The South Korean Defense Ministry has said the division of defense costs is fair. A ministry spokesman also said that South Korea is unwilling to pay more for the deployment of the THAAD missile defense system.

As a presidential candidate, Trump voiced support for allies gaining possession of nuclear weapons. Later, he denied the statement.

After the election, the president-elect promised to continue American security commitments. He did so during phone calls with South Korean President Park Geun-hye and Japanese Prime Minister Shinzo Abe.

Abe is planning to meet with Trump later this month before a meeting of the Asia-Pacific Economic Cooperation (APEC) group in Lima, Peru.

Last week, the office of South Korea's president said Trump told Park, "We are with you all the way and we will not waver."

Ambassador Hill says actions after the election show the importance of the U.S. alliances with Japan and South Korea in stopping North Korean threats and China's military power.

Hill also said he opposed offering unconditional talks or engagement with the North. He said that the government of Kim Jong Un must first agree to halt its nuclear weapons program.

Hill admitted that getting China's assistance for new sanctions on North Korea will be difficult if trade relations with the United States worsen.

We want to know what you thing. Write your comments about this story below.

impulsively – adv. to do something suddenly without careful thought

preemptive – adj. to take action to stop an unwanted act before that act takes place

intercontinental – adj. between two or more continents, able to travel the distance between continents

stability – n. the state of not changing easily or quickly, secure

engagement – n. a promise to stay or keep involved with someone or something

sanction - n. a measure designed to punish someone or something for failure to obey international rules

commitment – n. a promise to do something

reassure – v. to make someone less fearful or concerned