Formula One Races to Move Online

Update Required To play the media you will need to either update your browser to a recent version or update your Flash plugin.
By Pete Musto
26 March 2020


Formula One, or F1, racing drivers will join video game players and other people in a series of computer-based motor races, the sport announced last week.

These virtual events will take the place of several actual races that F1 officials postponed because of the coronavirus outbreak.

The first race, or grand prix, run on the official F1 2019 computer game, will be held this Sunday, when crowds should have been watching the real life Bahrain Grand Prix. 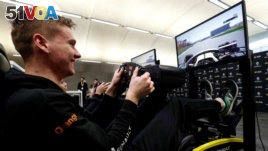 Competitors in the virtual race will have to go around the length of the race track over 28 times. That is half the real distance of the real track in Bahrain.

F1 officials said the virtual races, called the Esports Virtual Grand Prix Series, will continue until May. Other canceled or postponed races still to come include Vietnam, China, the Netherlands, Spain and Monaco.

The first of the series will see current F1 drivers compete against "a host of stars to be announced," said Formula One.

Those involved will compete remotely with a broadcast available on Formula One's YouTube, Twitch and Facebook channels. Each race is expected to last about 90 minutes.

Racing fans will be able to compete against real F1 drivers in special, internet-based individual races on non-grand prix weekends.

Julian Tan is the head of competitive gaming, or Epsorts, for Formula One. He said the F1 community is very pleased to be able to provide the virtual grands prix "in these unpredictable times."

"With every major sports league in the world unable to compete, it is a great time to highlight ... esports and the incredible skill that's on show," Tan told the Reuters news agency.

Interest in online racing has exploded since real life motorsport activities were halted by the coronavirus, and this weekend offers plenty of choice.

"Super Sim Saturday" offers fans three virtual races, one right after the other. They are the Nuerburgring Endurance Series, IMSA Super Sebring and THE RACE All-Stars Esports Battle.

Veloce Esports are running a ‘Not the Bah GP' on Sunday.

Golfer Ian Poulter said he will be in that field, along with Real Madrid goalkeeper Thibaut Courtois.

"It should be fun not just for me but [for] viewerships around the world which are craving sports... we'd love to get back to normality in sport as soon as possible, but if we can do it in a different format it will be quite fun for everyone to see," he said.

The Reuters news agency reported on this story. Pete Musto adapted the report for VOA Learning English. George Grow was the editor. We want to hear from you. Write to us in the Comments Section.

track – n. an often circular path or road that is used for racing

channels – n. systems used for sending something such as information or supplies from one place or person to another

fans - n. people who like and admire someone (such as a famous person) or something (such as a sport or a sports team) in a very enthusiastic way

highlight – v. to direct attention to (someone or something)

craving – v. having a very strong desire for (something)

format – n. the form, design, or arrangement of something (such as a book, magazine, or television or radio program)