Update Required To play the media you will need to either update your browser to a recent version or update your Flash plugin.
By Bryan Lynn
21 December 2022


The creator of video game Fortnite has agreed to pay a total of $520 million in government fines and repayments. A government agency that oversees trade accused Fortnite of illegally collecting children's private information and carrying out misleading sales methods.

The U.S. Federal Trade Commission (FTC) announced this week that it had reached an agreement with Epic Games to settle two cases against the company. The FTC is a federal agency that seeks to protect the public from deceptive business methods and unfair competition.

The settlement requires Epic Games to pay a $275 million fine for collecting personal information on Fortnite players under the age of 13 without getting their permission or informing their parents. 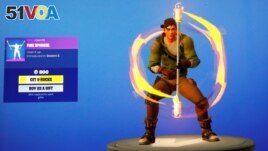 The popular video game "Fortnite" by Epic Games is pictured on a screen in this picture illustration August 14, 2020. (REUTERS/Brendan McDermid/Illustration)

Another part of the agreement seeks $245 million to be paid to Fortnite users who the FTC says were tricked into making unwanted purchases while playing the game.

Epic Games released Fornite in 2017 and it has grown to become one of the most popular online video games. The FTC said in a news release that the game has more than 400 million players worldwide.

Fornite is free to download and play. But players can pay for some additional elements, such as costumes and dance moves.

The FTC accused Epic Games of using so-called "dark pattern" methods "to trick players into making unwanted purchases." Dark patterns are online tricks designed to get users to do something they might not have meant to do.

The FTC said Epic's use of such methods included misleading button designs that led players to unknowingly make purchases.

Such methods led to "hundreds of millions of dollars in unauthorized charges" for users, the FTC said.

The privacy accusations involved the collection of personal information from children under age 13 who played Fortnite. The FTC said the data collection violated the agency's Children's Online Privacy Protections Rule, or COPPA. That rule sets requirements on operators of websites or online services directed at children under 13 years of age.

The FTC said its investigation found that Epic knew many children were playing Fortnite and that it collected personal information from them without getting parental permission. In addition, the agency said Epic required "unreasonable" methods for parents requesting that their children's personal information be removed.

Epic also violated another FTC rule by turning on real-time voice and text communications for children and teenagers by default, the agency said. This violation could result in children and teens being connected online with strangers to play Fortnite together.

The FTC said Epic employees had expressed concerns as early as 2017 about Fortnite's default settings.

Epic said in a statement it had agreed to accept the FTC settlement because it wants "to be at the forefront of (user) protection and provide the best experience for our players." The company said, "No developer creates a game with the intention of ending up here."

Epic said it had already taken steps to improve the design of its payment system "to provide the largest amount of clarity" to players making purchase decisions. "Games should go above and beyond to make sure players even more clearly understand when they are making a purchase" with real or digital money to prevent accidental purchases, the company said.

To protect children, Epic said it had increased the number of parental controls in the game. It also said it created a new kind of account for players under 13 that disables some parts of the game, including communications and in-game purchases.

Bryan Lynn wrote this story for VOA Learning English, based on reports from The Associated Press, Reuters, the FTC and Epic Games.

deceptive – adj. intended to make someone believe something that is not true

costume – n. a set of clothes someone wears to make them look like someone or something else

by default – n. something that happens if no changes are made

bully – n. to intentionally frighten or threaten someone who is smaller or weaker than you

be at the forefront – phr. to have an important position in an area of activity

intention –n. something that is planned to be done but has not been done yet; an aim or purpose

disable – v. to stop a system or piece of equipment from working