Update Required To play the media you will need to either update your browser to a recent version or update your Flash plugin.
By Gregory Stachel
03 May 2022


Scientists have identified some remains, or fossils, of huge ancient reptiles found on mountain tops in Switzerland years ago. The researchers' finding is a little surprising. The fossils are from ichthyosaurs, a very large animal that lived in water. But the remains were discovered many hundreds of meters above sea level.

The Journal of Vertebrate Paleontology published the study on Thursday. It describes some rib bone and backbone fossils from two ichthyosaur individuals. One bone was about 21 meters long, the other measured around 15 meters.

A tooth from a third ichthyosaur is also an important finding, says expert Martin Sander of the University of Bonn. He is the lead writer of the study. 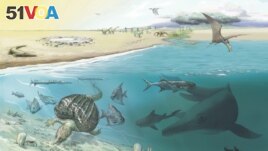 Reconstruction of a scene from 200 million years ago in what is now the Swiss High Alps. (Jeannette Ruegg/Heinz Furrer/University of Zurich/Handout via REUTERS)

"The tooth is particularly interesting because it could possibly - but unlikely - represent the largest animal to ever inhabit Earth," he said.

The tooth is about 6 centimeters at the base and about 15 centimeters long, the study says.

The fossils are around 205 million years old, the study found, dating them to the late Triassic Period.

The tooth came from a mountain near the Swiss city, Davos. It suggests the animal was a good hunter that could kill other large animals for food.

The ichthyosaur was the largest-ever reptile that lived in the seas. They had long bodies and small heads.

The fossils were found at three sites in the Swiss Alps during the 1970s and ‘80s, said Heinz Furrer, another study writer. Furrer is a retired scientist from the University of Zurich's Paleontological Institute and Museum. He was one of several students that discovered the fossils years ago.

Some researchers have proposed longer ichthyosaur lengths based on incomplete fossils.

Until now, huge ichthyosaurs had not been known to have lived at the end of the Triassic Period. Scientists had thought the group disappeared from Earth a few million years earlier.

The blue whale has long been considered the largest animal to have lived on Earth. It can grow to 30 meters long and weigh close to 200 metric tons.

But study writer Sander said more research on the Triassic ichthyosaur may renew questions about the planet's largest creatures.

plate – n. one of the very large sections of the Earth's surface that are believed to move and cause earthquakes where they touch each other