Could This Be the Fountain of Youth for Mice and Men?

Update Required To play the media you will need to either update your browser to a recent version or update your Flash plugin.
By VOA
03 Jun, 2014

Could young blood be the answer to cheating death? It may sound like the story in a vampire movie but now there is scientific research that supports the theory.

U.S. scientists have discovered a protein in the blood in young mice that can undo some effects of aging in old mice. The same protein is present in human blood and might one day help us lead healthier lives. 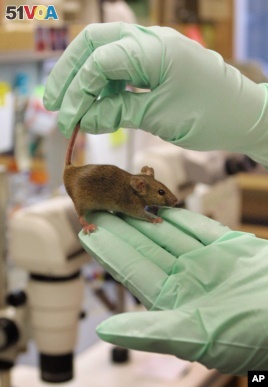 A protein found in young mice, which is also found in humans, formed new blood vessels and improved blood flow in older mice.

Researchers at Harvard University in Cambridge, Massachusetts explain how GDF11 improved the brain and muscle ability of older mice. This protein is found in high levels in the blood of young mice. And it appears to help develop new blood vessels.

Scientists saw the greatest change in the old mice that shared blood flow with the young.

The old mice formed new blood vessels. The animals' blood flow improved. And the aging process changed directions, or reversed, in every tissue the researchers observed.

Researcher Lee Rubin is a professor of stem cell research at Harvard's Stem Cell Institute. His team looked at the effect of GDF11 on brain tissue.

"So, this simple surgery, infusing an old mouse with young blood, actually produced some structural changes in the old brain, making the old brain, in essence, more like (a) young brain. And some people have used the phrase 'rejuvenating the old brain.' And similar things were observed in other tissues."

So, this is great news for old mice. But what does it mean for us? There is growing hope GDF11 might someday repair and renew unhealthy human hearts. Also, Mr. Rubin says the protein might improve memory power for Alzheimer's patients or physical movement for people with Parkinson's disease.

But the researcher says the protein is not a "fountain of youth." He says the aim of the research is not to lengthen life as much as to improve it.

"In other words, even if you did not live more years, at least you could remain healthier for the number of years you do live. And I think again, what we've shown is functional improvement in ... various different tissues in mice."

Researchers at Stanford University in California are doing similar research. They report that blood from young mice improved brain operations in older mice.

Researchers in Massachusetts and California are working with technology companies that specialize in human medicine to see how these findings can help humans.