Things You (Probably) Don't Know About the Fourth of July

Update Required To play the media you will need to either update your browser to a recent version or update your Flash plugin.
By Kelly Jean Kelly
03 July, 2017


"The day will be the most memorable in the history of America," wrote John Adams in 1776. People will honor it with parades, fireworks and celebrations, he added.

Adams was talking about the second of July.

That is the day the Continental Congress voted in support of independence from the British. But the date written on the Declaration of Independence is July 4. So, since 1776, Americans have celebrated July 4 as the country's Independence Day.

Patriotic to the end

Several early presidents of the United States died on July 4. They include John Adams, who became the second president.

And the 30th president, Calvin Coolidge, was born on July 4.

Most Americans celebrate Independence Day with barbecues, parades and, yes, fireworks. But a few celebrate by eating all the hot dogs they can. 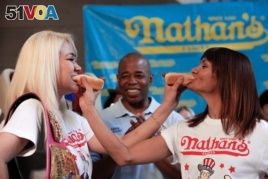 Since the early 1970s, a restaurant called Nathan's Famous has organized a competition to see who can eat the most hot dogs in a short time. The event is now shown on sports broadcaster ESPN. It includes a women's competition and a men's event. Both are held in New York City, in an area called Coney Island.

In 10 years, Joey Chestnut has won the men's contest nine times. In 2016, he set a record at the competition by eating 70 hot dogs in 10 minutes.

Where do those fireworks come from?

Let's go back to those fireworks, probably the most common image related to Independence Day. Americans really, really love fireworks. The American Pyrotechnic Association – "pyrotechnic" is another word for "fireworks" – reported that Americans spent $825 million on fireworks last year.

Where do many of our fireworks come from? China.

By the way, we also import most of our American flags from China, too.

disgusting – adj. so unpleasant that you feel slightly sick

barbecues – n. outdoor meals or parties at which food is cooked on a barbecue