Foxconn May Spend Over $10 Billion in US Expansion

Update Required To play the media you will need to either update your browser to a recent version or update your Flash plugin.
By John Russell
25 June, 2017


A Taiwanese electronics company says that it may spend more than $10 billion to develop factories in the United States.

Terry Gou, chairman of Foxconn, made the announcement to reporters Thursday. In January, the company said it would build a display panel factory, estimated to cost as much as $7 billion. Gou did not provide details Thursday about where building might take place.

Foxconn is the biggest contract manufacturer for smartphones. It makes products for Apple, Sony, Blackberry and other companies. 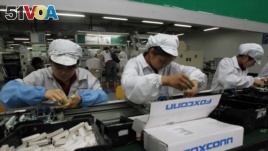 FILE - An assembly line in a Foxconn plant.

He said that Foxconn has been in contact with the Trump administration. He added that he expects to finish negotiations by the end of July or early August.

The first investment agreements could involve at least three U.S. states. Three others could be added later, Gou said.

"We will provide at least tens of thousands of job opportunities," Gou said Thursday.

He said Foxconn hopes to work with American states such as Ohio, Pennsylvania, Michigan, Illinois, Wisconsin, Indiana and Texas.

Implications of Foxconn's expansion to the U.S.

In January, Gou said that Pennsylvania was the top candidate for the panel factory. It would be linked with the Sharp electronics company.

Foxconn bought the Japanese company in March 2016 for $3.5 billion.

Expansion into the United States would decrease Foxconn's dependence on China. The company has about 1 million employees and most of its operations in that country.

Joe McDonald and Johnson Lai wrote this story for AP. John Russell adapted it for Learning English. Caty Weaver was the editor.

display panel – n. a part of an electronic device (such as a computer monitor) that shows information

smartphone – n. a mobile telephone that can be used to send and receive e-mail, connect to the Internet, take photographs, etc.

automation – n. running or operating (something, such as a factory or system) by using machines, computers, etc., instead of people to do the work