Update Required To play the media you will need to either update your browser to a recent version or update your Flash plugin.
By Kelly Jean Kelly
11 August, 2019


Life may soon change for some women in France. French law currently prevents unmarried and homosexual women from seeking medical help to get pregnant. If they want assistance conceiving a child, they must go to a country where the process is legal.

France limits assisted reproduction to heterosexual couples who are not able to get pregnant in the usual way. But government officials recently proposed a new law. 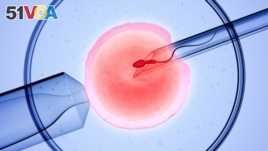 The proposed law would permit doctors to combine male and female cells to create an embryo in unmarried or gay women.

The measure would give unmarried and homosexual women access to medically assisted reproduction in France for the first time.

The law would permit methods such as artificial insemination and in vitro fertilization. During such treatments, doctors combine male and female cells to create an embryo. The male cells may come from someone the woman knows, or they may be from an unknown donor.

The proposal calls for France's national health care system to pay for four attempts of assisted reproduction each time a woman wants to get pregnant.

The proposal also says children conceived with donated male cells should be able to learn the donor's identity after they turn 18. The current law strictly protects donors' identities.

French officials say they are proposing the law to answer changes in society.

At least 20 groups have already spoken out against the idea, however. They are organizing a protest to oppose the bill. The groups say the law will lead to more children being raised without fathers.

They also worry that expanding access to different ways of getting pregnant will lead to legalizing surrogate pregnancies. In that process, a woman carries and delivers a baby for someone else. French law currently does not permit surrogate pregnancy.

Alberic Dumont is a critic of the proposed bill. He says the French government is creating new rights while ignoring the effects on children.

But supporters of the proposal say it would help many French women. One example is Virginie. She married her wife, Cecile, in June. They recently paid for male cells to be mailed from Denmark so that Virginie could get pregnant. The cost was more than $1,000, and the move was illegal.

Virginie told the Associated Press that breaking the law was difficult. She did not want to use her family name for this story. She says if her pregnancy fails -- and if the proposed bill succeeds – she and Cecile will consider using the new French law to try again.

Lawmakers in France will debate the proposal later this year.

The Associated Press reported this story. Kelly Jean Kelly adapted it for Learning English. Ashley Thompson was the editor.

homosexual - adj. of, relating to, or characterized by a tendency to direct sexual desire toward another of the same sex : gay

heterosexual - adj. of, relating to, or characterized by a tendency to direct sexual desire toward the opposite sex

access - n. freedom or ability to obtain or make use of something

artificial insemination - n. introduction of semen into the uterus or oviduct by other than natural means

in vitro - n. outside the living body and in an artificial environment