Americans Driven by 'Gut Instinct' to Act in Train Attack

Update Required To play the media you will need to either update your browser to a recent version or update your Flash plugin.
By VOA
24 August, 2015


Three Americans, a Briton and a French citizen stopped a heavily-armed gunman on a high-speed train in France last week. The Americans said later that gut instinct -- a feeling they had -- made them jump into action to stop the gunman.

Spencer Stone, Alek Skarlatos and Anthony Sadler told their story on Sunday to reporters at the United States Embassy in Paris. They described how they overpowered Ayoub El-Khazzani on the train. Spencer Stone wore a thick bandage on his thumb that was almost cut off during their struggle.

Both Mr. Stone and Alek Skarlatos have military training. But Mr. Skarlatos says the training did not influence their actions. Instead, he says it was a survival instinct -- wanting to stay alive -- that drove them to act. 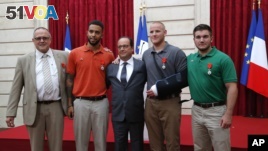 French President Francoise Hollande awarded the Legion of Honor medal on U.S. Airman Spencer Stone, National Guardsman Alek Skarlatos, and their years-long friend Anthony Sadler, who subdued the gunman as he moved through the train with an assault rifle strapped to his bare chest. The British businessman, Chris Norman, also jumped into the fray. (AP Photo/Michel Euler, Pool)

"I feel our training mostly kicked in after the assailant was already subdued, frankly. When it came to medical care and things like that, and providing security and making sure there wasn't another shooter. But in the beginning, it was mostly gut instinct."

The Americans, the Briton and the French citizen have been praised for stopping what could have been a bloodbath. On Monday, French President Francois Hollande presented France's highest honor – the Legion of Honor – to the four foreigners. The president also honored the Frenchman, who first discovered the gunman near a restroom on a train car.

The train was carrying 554 people to Paris when the man started his attack, firing his weapons. Ayoub El-Khazzani was heavily armed. But no one died in the attack. Mr. Skarlatos says he thinks the gunman had little experience using weapons.

"He clearly had no firearms training whatsoever, and yes, if he knew what he was doing—or even just got lucky and the did right thing—he would have been able to operate through all eight of those magazines and we would have been in trouble and probably wouldn't be here today, along with a lot of other people."

French officials are still questioning the Moroccan-born gunman. He is believed to have links to Islamic extremists and may have travelled to Syria. On Sunday, his lawyer told French TV that Mr. Khazzani is shocked to be linked to terrorism. She says he said he found the weapons, and wanted to rob passengers on the train.

Reporter Lisa Bryant wrote this story for VOANews.com. Anne Ball adapted it for Learning English. George Grow was the editor.

gut instinct – n. a way of behaving, thinking, or feeling that is not learned

bandage – n. a piece of cloth protecting a part of the body that is injured

bloodbath – n. the killing of many people

magazine - n. a part of a gun that hold bullets